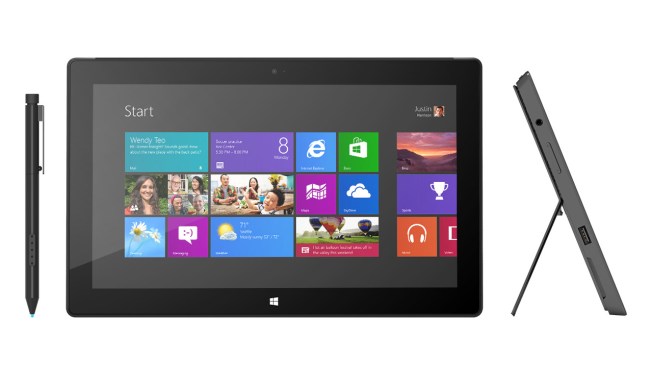 Not surprisingly, Microsoft is pricing its Surface with Windows 8 Pro tablet — the one that will actually be able to run older Windows applications — about the same as Windows 8 Ultrabooks.

The 64 gigabyte Surface Pro (as it’s commonly called) will run you $900 for the 64-gigabyte version, and $1,000 for the 128 GB model, Microsoft announced today. Both will be available in January and will come with a Surface Pen. Unfortunately, the pricing doesn’t include a Surface Touch Cover or Type Cover, which will cost an additional $120 and $130, respectively.

Unlike the Surface RT, which can only run new apps from the Windows 8 Store thanks to its ARM processor, the Surface Pro is no different than a typical Windows 8 laptop. It sports a Core i5 Intel processor, allowing it to run existing software for Windows 7 and prior versions of the OS. It also sports a high-resolution 1080p display, a USB 3.0 port, and the same kickstand found in the Surface RT.

You’ll pay a slight weight cost for the Surface Pro’s versatility: It weighs about 2 pounds, compared to the Surface RT’s 1.5 pounds, and it’s slightly thicker. It also costs almost twice as much as the Surface RT, which starts at $500 (or $600 for the model that includes a Touch Cover). The difference, of course, is that the Surface Pro is a fully functional computer, unlike the slightly gimped Surface RT.

Compared to other Ultrabooks and ultraportables, the Surface RT has quite a bit going for it. It’s lighter than the 11-inch MacBook Air, has a higher resolution screen, and is priced about the same. We’ve seen some interesting Windows 8 Ultrabooks like the Lenovo IdeaPad Yoga and HP’s Envy x2 hybrid, but the Surface’s unique design and keyboard covers makes it more intriguing.

Given that most of my frustrations around the Surface RT stemmed from its slow ARM processor and limited apps, I’m looking forward to testing out the Surface Pro. It could just be that no compromise computer of the future I’ve been waiting for.

Update: It looks like the Surface Pro will have around half of the Surface RT’s battery life — which should put the Pro at around 4 hours — according to the official Surface Twitter account.