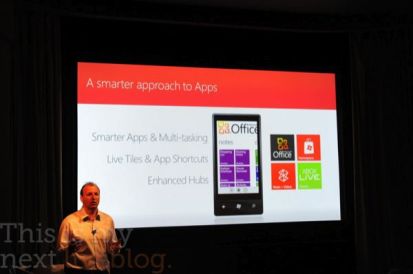 Microsoft shed some light on the first big update to its Windows Phone 7 operating system, Mango, during a press event in New York City today.

The company explained how it was entering into an already crowded mobile market and realized that phones were becoming little more than app launchers. Presumably, Mango will put the user at the center of the experience and not the operating system, according to Andy Lees.

The Mango update heavily focuses on an integrated experience, which they demonstrated on stage by going through all of the basic native apps like contacts, web browsing as well as web searching and multitasking.

Other updates in Mango include:

Microsoft has already released Mango tools for app developers, but the upgrade won’t be available on phones until this fall. Once it does become available, users will be able to upload it to their phones via their PCs for free.

Microsoft briefly spoke about its partnership with Nokia before wrapping up — revealing that all Nokia phones will run Mango, which is currently testing in labs.