Microsoft today unveiled the Surface Book 2, available for the first time in two sizes: a 13.5-inch, like its predecessors, starting at $1,499 and a new 15-inch, the largest Surface laptop yet, starting at $2,499. Both feature up to 17 hours of battery life, a USB-C port, and the latest 8th-generation Intel Quad-Core processors. Surface Book 2 will be available for preorder on November 9 and starts shipping on November 16.

While the 13.5-inch for $1,499 succeeds the original Surface Book laptop released in November 2015, there’s also a 13.5-inch starting at $1,999 that succeeds the Surface Book i7 released in November 2016. As you might expect, this model is more powerful (i7 CPU and GPU in the base), but it is thicker (with fans) and less portable. The 15-inch only comes in the i7 version, which is more powerful but also thicker.

“There is no laptop that’s ever pushed this much computational power in this form factor,” Panay declared. “It’s just not happened. It is truly a beauty and a beast.” 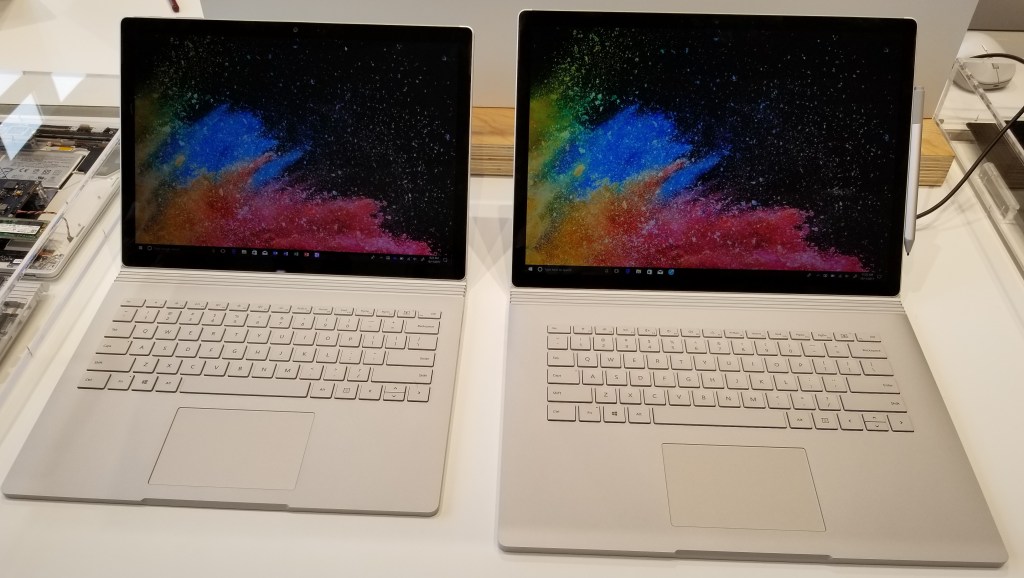 As he’s done multiple times before, Panay pitted the latest Surface device against its Apple counterparts. Unsurprisingly, it wasn’t pretty.

“These are performance beasts,” Panos repeated. “The Surface Book 2 is twice as performant as the Macbooks in the market now. So if you took the 13-inch and you compared it to the 13-inch, you would see it’s two times more powerful. If you did the same with the two 15-inches, you would see it’s two times more powerful. That includes the fact that they’re delivering 30 percent more pixels in both. And probably the most important data point is 70 percent more battery life on your Surface Book 2 than on your Macbook Pro.” 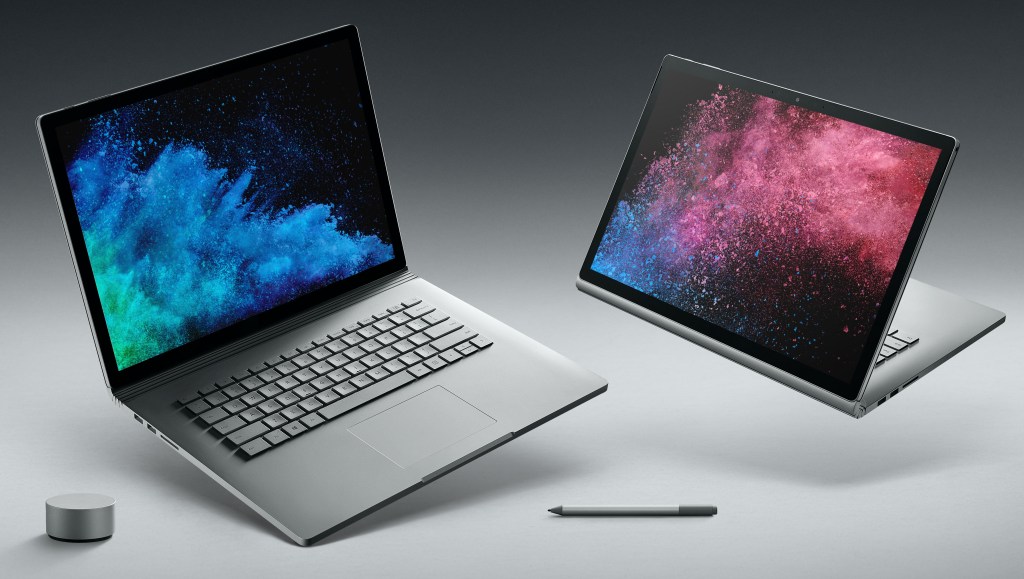 Performance aside, Surface fans will be happy to learn that in addition to the two full-size USB-A ports, there’s now also a USB-C port instead of a Mini DisplayPort. This is the first Surface device to include a USB-C port.

The 15-inch device has one more unique feature worth calling out: a built-in Xbox controller radio that supports up to eight devices connected at one time. So, for example, two people can game with their own separate controllers and headsets. Bluetooth can’t even support one wireless controller and one wireless headset. 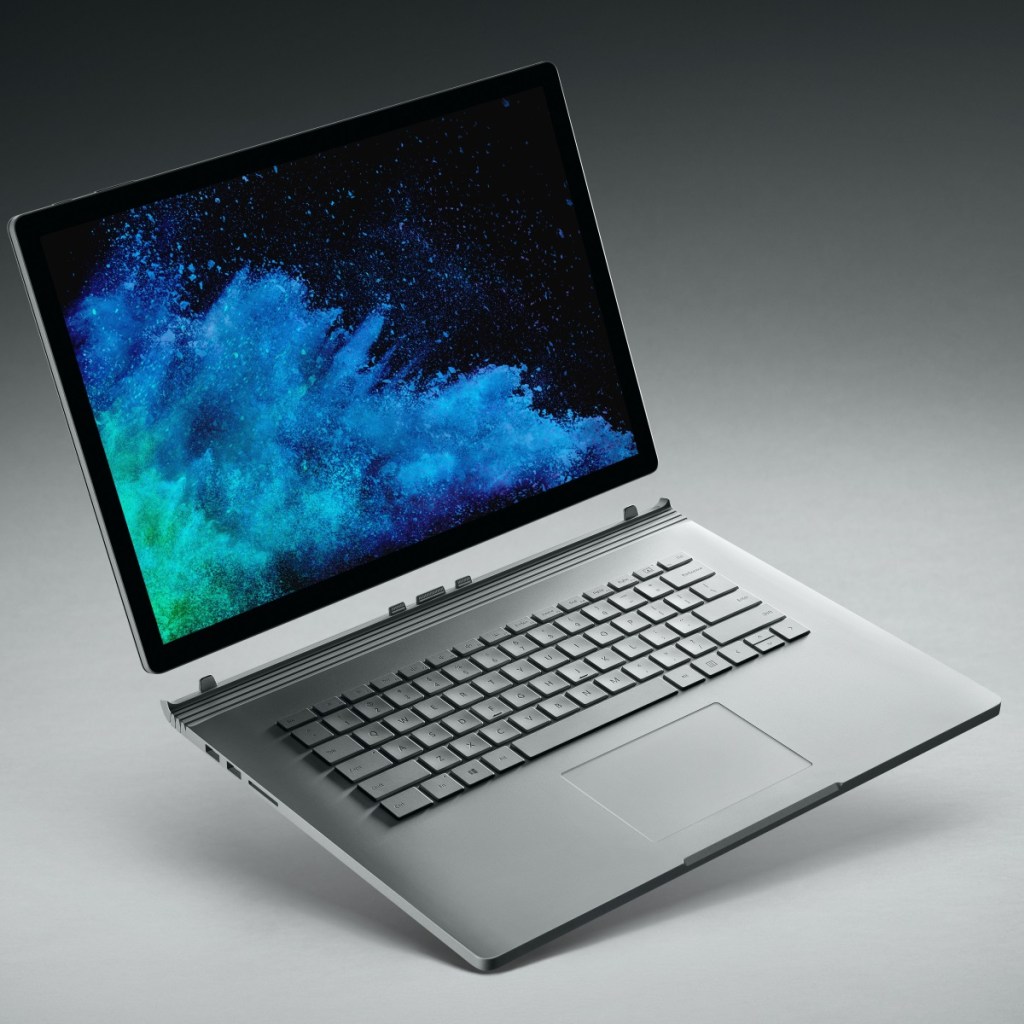 The full Surface Book 2 specs are below, broken down by the three models.

The rest of the specs are the same across all three:

Personally, I’m just excited that Microsoft finally built a 15-inch laptop. While 13-inch is the form factor most people opt for, I prefer a less portable but more powerful machine, and at the end of the day that’s exactly what the Surface Book is: a laptop beast.

Nonetheless, Microsoft’s message to press was that the Surface Book 2 is meant to showcase the Fall Creators Update that is launching today. One of the biggest features the update brings is support for Windows Mixed Reality.

Back in October 2016, Microsoft revealed that its PC partners would be shipping Windows 10 VR headsets in 2017, starting at $299. The first ones are arriving today, including those from Acer, Dell, HP, and Lenovo. Samsung will launch its VR headset on November 6, and Asus will join the party in Spring 2018.

Microsoft naturally wants you to plug these Windows Mixed Reality headsets — which don’t require setting up any external cameras — into a device like the Surface Book 2. But any capable machine with the Fall Creators Update will do. 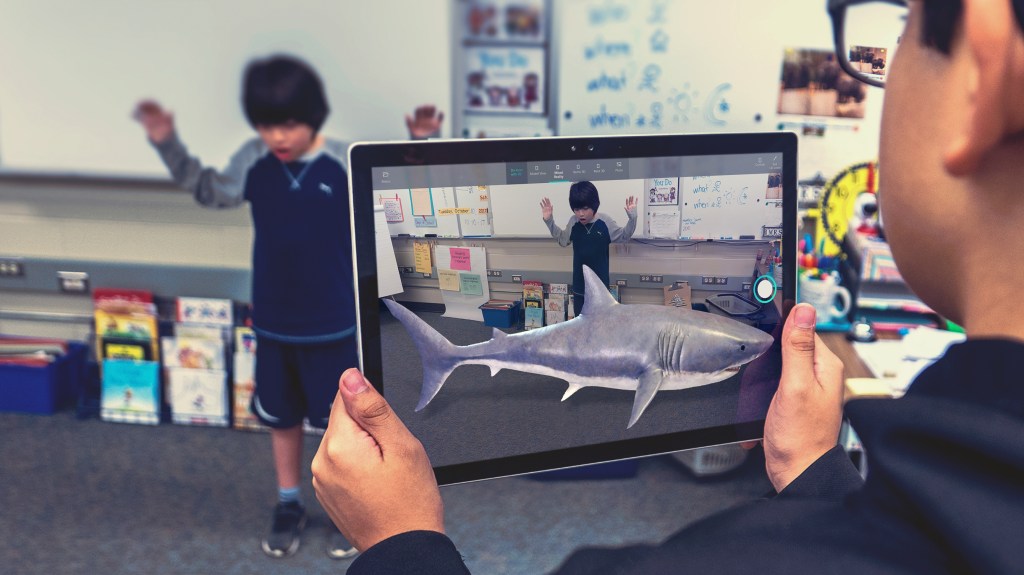 The update notably also includes the Mixed Reality Viewer, which lets you use the camera on your PC to view 3D objects in augmented reality (mixed into your environment). Microsoft promises travel, sports, live concerts, and gaming content from over 20,000 apps in the Microsoft Store that work in mixed reality.

Microsoft also promises that the Surface Book 2 will handle anything you throw at it, as it has “the power of a laptop, the versatility of a tablet, and the freedom of a portable studio all in one beautifully styled device.” It can not only run professional software like Adobe, Autodesk, and Dessault “flawlessly,” it also handles PC games at 1080p and 60 FPS, “including demanding titles like Forza Motorsport 7 and Gears of War 4.”

In short, this is the laptop Microsoft insists will do it all, if you can stomach the price tag.