Artificial intelligence (AI) can aid radiologists in diagnosing pneumonia, predict your taste in music, and even forecast aftershocks. Turns out it’s a pretty capable pizzaiolo, too — albeit one with a few idiosyncrasies.

How To Generate (Almost) Anything, a project founded by MIT graduate students and postdoctoral researchers, trained a machine learning model — specifically textgnrnn, an open source recurrent neural network that produces phrases from text datasets — on hundreds of “artisan pizza recipes” from food blogs around the web. And they teamed up with Crush Pizza, an artisan pizza restaurant in Boston, Massachusetts, to bake them into reality.

So how’d the AI chef (lovingly dubbed “Strono” by the team) do? While some of the recipes contained a few atypical ingredients (one called for “snipped caramel cheese” and “wale walnut ranch dressing”), others came out surprisingly tasty-sounding (“sweet potato beans and brie”). None were perfect, though — because the team’s AI system didn’t consider composition or flavor in its mashups, it sometimes omitted protein, sauces, and cheese. (In those instances, Crush Pizza’s resident chef supplied suggestions.) 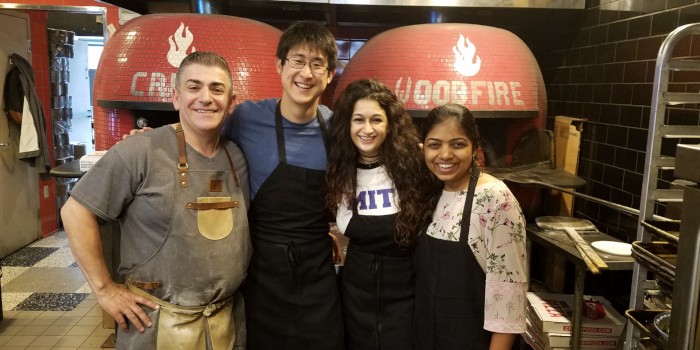 No recipe brainstorming session would be complete without a taste test, of course, so the team fired up Crush Pizza’s 900-degree wood-fired oven and got cooking. Highlights of the bunch included a blueberry, spinach, and feta pie; bacon, avocado, and peach; and apricot, pear, cranberry, and ricotta. The undisputed winner was the shrimp, jam, and Italian sausage combo, apparently — it was good enough that Crush Pizza’s owner is considering putting it on the menu.

“In the midst of ‘AI awakening’ where machines are becoming good at many ‘human’ jobs, people are worried that AI will ultimately lead to mass unemployment by replacing them,” the group wrote in a Medium post. “[W]e believe that we can achieve the most creative and productive outcomes when humans and machines work together to enhance each other’s complementary strengths and skills.”

How To Generate (Almost) Anything’s pizza experiment brings to mind Chef Watson, an IBM research project that sought to create new recipes by analyzing the chemical composition of hundreds of different ingredients, more than 10,000 recipes (from Bon Appétit). A cookbook of its creations was published in 2015.

“Food is very psychological,” CEO and cofounder Spencer Price told VentureBeat in an interview in August. “Every dish breaks down into tremendously data-rich subcomponents.”

How To Generate (Almost) Anything, which is modeled after MIT’s How to Make (Almost) Anything class, describes itself as “augmenting human capabilities and pushing the boundaries of creativity” with AI. The group is aiming to “generate something with AI” every week and publish the results on YouTube, Medium, and social media.