Whenever you hear how many people an internet service or a gamer reaches, it’s usually an astronomical number. Take Mobcrush, the mobile livestreaming service that reaches more than 1.5 billion social media users in the world.

How can that be, given the country only has about 326 million people in it? That’s because people have multiple social media accounts where they follow a lot of the same folks. And that’s why, for the sake of accuracy in advertising numbers, it’s important to “deduplicate” those numbers. For Mobcrush, the result is that it reaches 160 million people in the U.S., or about 75 percent of the total U.S. gaming audience, based on an estimate from ThinkNow Research.

That actual reach of 160 million doesn’t sound as good as 1.5 billion theoretical reach, but it’s a lot more accurate, according to a study by analytics firm CreatorIQ. Mobile advertisers have gone through this process of “deduplicating” audiences, but now it’s time for livestreaming platforms to do the same thing.

“Gamers are on multiple platforms with audiences that are growing,” said Michael Wann, CEO of Mobcrush, in an interview with GamesBeat. “We try to reach all of them. As we hit scale, the number of our reach was hard to believe. That’s why we need a common standard for deduplicating audiences. We could not find one, so we went to CreatorIQ.” 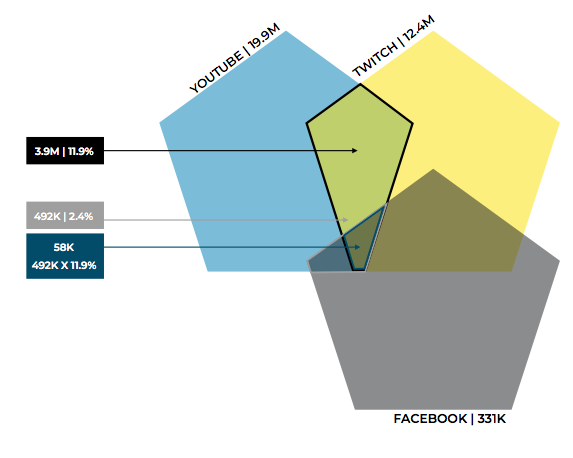 Above: Ninja’s reach is impressive, but not quite as big as expected after deduplication.

To illustrate, Mobcrush and CreatorIQ looked at the audience of Ninja, the popular livestreamer who broadcasts gameplay of his sessions of Fortnite and other games. He reaches 47 million people on YouTube, Twitch, Instagram, Twitter, and Facebook. If an advertiser were to pay for an ad on Ninja’s audience, they might say they’re reaching 47 million people. But this number doesn’t take in account duplication, where people follow him on more than one account. Those people are not going to be watching him on two separate platforms at the same time, according to Jessica Balke, data analyst at CreatorIQ, in an interview.

If you deduplicate that audience, then Ninja’s actual following is about 4.3 million fewer people, or 42.7 million. Accordingly, someone paying to advertise to his audience would have a slightly smaller bill to pay.

Above: Deduplicating the U.S. gaming audience.

Mobcrush’s deduplicated number is a lot smaller than its theoretical reach. That’s because each of the 132,000 social accounts on Mobcrush can publish simultaneously to a bunch of social platforms at the same time. (You can, for instance, use a Mobcrush livestreaming account to broadcast to Twitch and YouTube at the same time).

“People don’t watch on multiple devices at once, so we needed something that took out those instances,” Wann said.

The total reach across those platforms is big, but a real member of the audience will only be watching the stream on one of those platforms. If a single person followed 50 different accounts of video game streamers on Mobcrush, they would be counted 50 times. CreatorIQ has created a model that deduplicates the number using both first-party and third-party data.

Wann said Mobcrush’s actual audience size has nearly tripled in the last six months. And Wann said that Mobcrush is going to improve its audience further through a partnership with Yeah1, a livestreaming network in Southeast Asia with 160 million users. 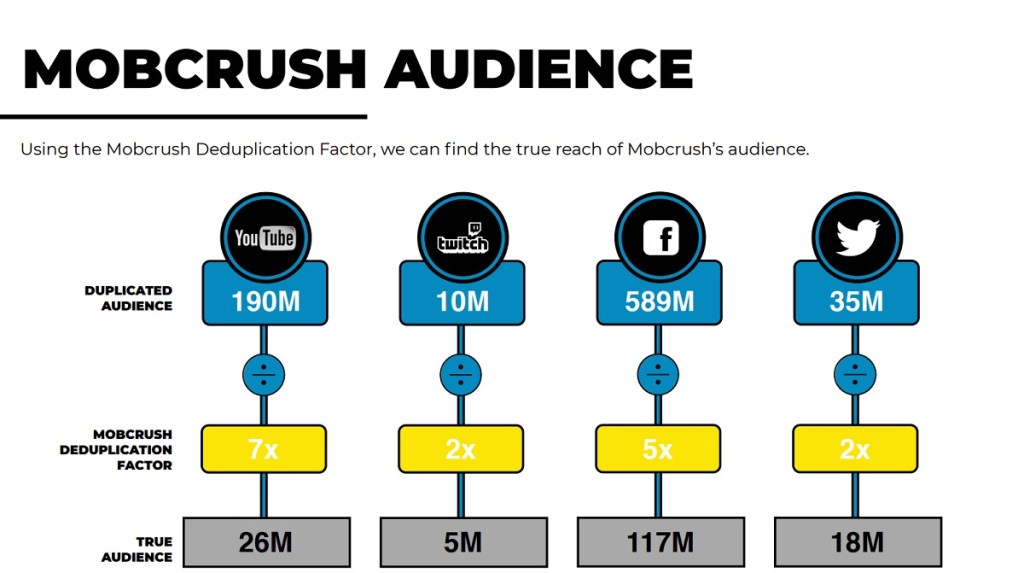 As a result, Mobcrush will bring its multi-casting capabilities and Go Live Get Paid platform to Yeah1 users, who generate more than 3.2 billion monthly views. But before you get too excited about that, you have to note that someone broadcasting in English on a livestream platform like Mobcrush is not likely to reach someone in Asia who doesn’t speak English. Still, the numbers are good for Mobcrush.

Mobcrush has paid out more than seven figures in cash to its creators.

“We have been expanding the Mobcrush capabilities over the past year and seen a hockey stick,” said Wann. “We started expanding to Southeast Asia with Yeah1. This became a really interesting partnership to help them grow their audience and improve monetization.”