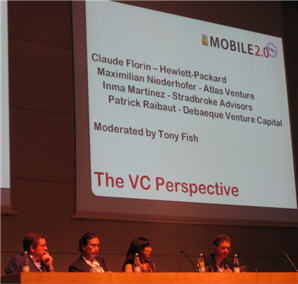 After being in the US the last few months I attended the Mobile 2.0 Europe conference last Friday.

The Mobile 2.0 events are known for often being early in championing mobile issues that become more mainstream later. They’re also known for giving a variety of folks in the mobile ecosystem a place to meet and discuss things openly, a rare find in mobile. This time, panel discussions covered mobile social media, VCs & mobile, operators and open business models.

The experienced American and European organizers understand the mobile startup scene is global, with no real epicenter like Silicon Valley, yet.

Zipipop’s mobile service, called Zipiko, has a neat application, for sorting out your social life. The video is worth watching. And as for Rummble, it is a location-based discovery tool, and I liked it better than Whrrl. We covered Nimbuzz, the mobile communications kitchen sink, here.

Another company from the seed category that caught my eye is the voice-service dial2do. Voice-activated services have a clear value proposition, and CEO Ivan MacDonald has produced a pair of powerpoint slides demonstrating it. The company is a phone service for “hands-free” users. It lets them text, email and perform other services while they are driving.” 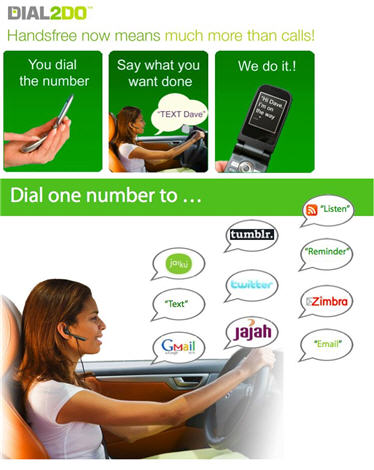 I’ve been convinced about the value of these services for awhile. The car is a place where we spend hours each day, but our communications patterns in the car are so primitive. It’s an area waiting to be exploited by a new startup offering a new interface.

Voice-activated services were pushed this year at the industry conferences GSMA and the CTIA. There are already quite a few startups in the field, including: Tellme, free411, Vlingo, Jott, Spinvox and Dialdirections. In the US these services have still seen little traction relative to their potential, in my view. That may change due to legislation for hands-free driving in California and elsewhere.

From the conference’s panel discussions, VentureBeat readers may have found the VC panel most interesting. The chairman of that panel, Tony Fish, sent me the link to his summary remarks and I took the liberty of sorting them, putting them in context and adding a summary.

Mobile as an Investment:
Tony Fish confronted the panel with the decline in IPOs and asked them about the reasons. He subsequently dug deeper and asked why there were no notable exits in mobile. While the panel believed the innovation is good — it maintained that the mobile startups are very innovative (“at the product level the innovation is very high”) — it concluded the following:

— VCs cannot make money (in mobile) — the exits are not large enough given the risk and investment.
— Mobile competes with other more attractive investment opportunities.
— The VC industry is struggling with the current conditions on the financial markets.

B2C investments into mobile:
Applications that focus directly on consumers face too many hurdles. They still have a maze of operators to grapple with. Too few examples of large mobile successful exits (sales or IPOs) in the sector holds back investment in the sector. Past returns on investment in the segment are unsatisfactory. Among others, the panel gave two reasons behind the judgment: Mobile is fundamentally flawed — there are too many small channels in mobile right now (“channel friction”), which makes scaling very hard. Also, the VCs argued that they need a way around a revenue-sharing dependence on carriers. Carrier deals can easily take nine to twelve months to complete. This is too long.

However, two arguments were raised that brightened the mood of this rather somber setting. First, Tony Fish used the expression “know your audience before you exploit their data”. B2C companies having smart, sensitive marketing teams have a good understanding of user/consumer data and how it should be used. The panel saw B2C in mobile as potentially the “most intimate marketing channel” there is. Therefore, there’s a lot of promise in the segment, especially if someone cracks behavioral targeting. Second, the panel believed flat rate data and operator charges will give B2C a boost short-term.

Investments into enterprise:
The panel had a much rosier outlook on enterprise models. There was consensus that a clear business model exists: selling to larger companies. In particular, connecting things is of interest — meaning mobile startups with a service that creates an additional sales channel for already established businesses. If I remember correctly, an example given for an “additional sales channel” was a mobile service that lets the user directly print with a HP printer (“the existing business”) after a picture shot was taken.

Summary:
My impression not only from the panel, but from the talks I had, is that in Europe there is less enthusiasm about mobile right now than there is currently in the U.S., specifically in Silicon Valley, home of Apple and Google’s Android project. The conference did a great job of giving an overview of current issues in mobile. However, it put less emphasis on possible shifts in landscape. The Apple iPhone and Google Android projects were only touched on briefly. Also, I heard little of the arguments being put forward by the current-day optimists. So I am still wondering: Is now the right time to make it really big in mobile?

Check out MobileBeat2008, VentureBeat’s conference on July 24, where this is one of several questions we’re asking.