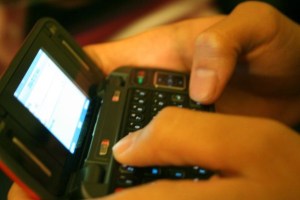 The notion of the post-PC era may have legs to stand on, and Facebook could be playing a key role in the shift. This according to new data that highlights increasing mobile application usage at the expense of web consumption.

Mobile apps continues to rise in popularity, with people now spending 94 minutes per day, on average, using mobile applications, according to analytics firm Flurry. Meanwhile, web consumption, on both desktop and mobile devices, has started to wane.

Flurry tracked anonymous sessions across more than 140,000 applications and compared that data against web data from comScore and Alexa. Since the firm’s initial report in June, mobile app usage has increased by 13 minutes a day, while web consumption dipped from 74 minutes per day in June 2011 to 72 minutes per day in December 2011.

What are mobile app users doing? Gaming and Facebooking, of course. Games (49 percent) and social networking apps (30 percent) combined to account for almost 80 percent of all time spent in mobile applications, according to Flurry’s analysis.

The growing chasm between mobile app usage and web consumption will only be exacerbated by mobile device purchases in 2012. “Flurry estimates that the cumulative number of iOS and Android devices activated will surge past 1 billion,” Flurry senior marketing manager Charles Newark-French said. “According to IDC, over 800 million PCs were sold between 1981 and 2000, making the rate of iOS and Android smart device adoption more than four times faster than that of personal computers.”

Flurry anecdotally attributes the measurable shift to Facebook users who are increasingly accessing the social network via mobile applications. The firm does not track Facebook usage, but points to Nielsen data on Facebook mobile usage and the success of Facebook Messenger to support its hypothesis.

“As Apple and Google continue to battle for consumers through the operating system and devices, Facebook is demonstrating that it can leverage its hold over consumers at the software level, through the power of the social network, across multiple platforms,” Newark-French concludes.

So maybe it’s not evidence of a post-PC era per se, but instead a Facebook era that has consumers clamoring for access to their News Feeds wherever they are.

Here’s another interesting takeaway that may put to the rest the native vs. HTML5 app debate: The decrease in web consumption, which includes mobile web usage, could be evidence of consumers’ growing preference for rich, native application experiences. 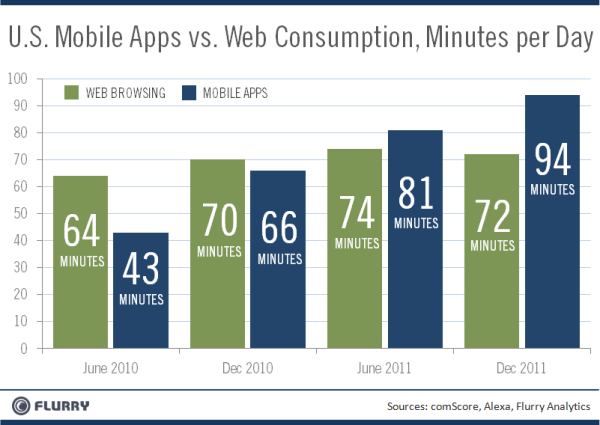