But those were just the beginning. Since 2015 we’ve said that Apple could own AR long-term, particularly the premium end of mobile AR. But if the mobile AR war has seemed a civilized affair so far, Apple’s AR announcements at WWDC were laser guided cruise-missiles carrying multiple warheads aimed at their major AR competitors. To understand what Apple’s new initiatives could mean for Facebook, Snap, Google, Tencent, Amazon and Alibaba, let’s start with the AR components of Apple’s hardware roadmap we forecast in coming years:

But forecasting Apple’s road map is a tricky thing. Because Apple. So the one thing you can guarantee is that all this might change as Apple reveals more in the next 12 to 18 months.

Above: Memoji at WWDC

Memoji is Apple’s Bitmoji (let’s not talk Samsung). And Memoji could become an existential threat to Snap.

You can only use Memoji and Animoji on the iPhone X today, which is a high-end subset of the market most teenagers can’t afford. But if we’re right about Apple front-facing TrueDepth cameras on the iPhone 8s/9, then the 84 percent of teens who intend to buy an iPhone are going to want one next year.

Apple appeared to put Evan Spiegel publicly in its crosshairs at WWDC. Where the ghost Animoji was a friendly wink, Kelsey Peterson’s “Snap and send” wasn’t a hard read. But while Memoji look to be aimed at Snap, Apple’s real target could be Facebook.

Facebook has more to lose than Snap, with 91 percent of its advertising revenue from Messenger, Instagram, and WhatsApp. Facebook’s messaging platforms are used by everyone from your niece to your iPhone owning grandmother. By integrating Memoji into both iMessage and Facetime, Apple delivered a one-two shot straight to Facebook’s gut. Tim Cook’s recent statements about Facebook and Apple’s approach to privacy also make Memoji a judo black-belt move to throw Mark Zuckerberg off-balance.

The Chinese market is critical for AR, where Apple sells 85 percent of premium phones. But while Memoji are a threat to Tencent at the top-end of the market, the dominance of WeChat and Android phones in China make Memoji less of a threat to Pony Ma’s Tencent than to Mark Zuckerberg’s Facebook.

AR Cloud with a chance of showers 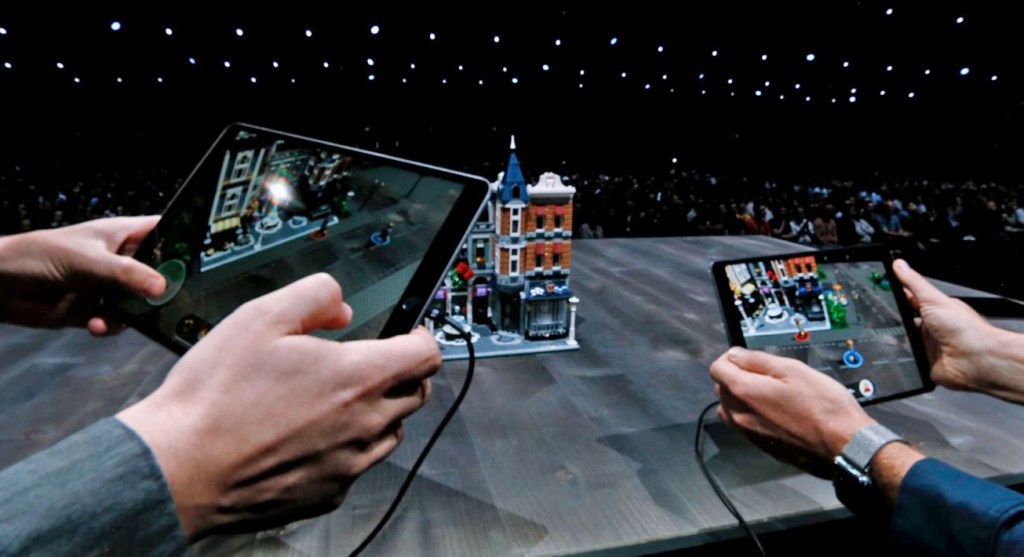 AR Cloud (a persistent 3D real-world data layer for shared AR apps) is a hot topic inside the AR industry, and could become a critical part of the stack to make AR valuable. We’ve said for some time that Google is the natural owner of the AR Cloud, because it has the strategic assets it needs to dominate.

We think the first critical AR use case (even if you love Pokémon Go) was shown by Google Lens VP Aparna Chennapragada at Google I/O. There was a visceral wave of excitement in the crowd when that magical combination of Google Lens, Maps and Streetview solved a universal first-world problem. Come out of Embarcadero station, Google Maps tells you to head South, but where’s South? Leveraging Lens, Maps, Streetview and VPS (Visual Positioning System), Google enables your phone to show you where to go. There’s even a fox you can follow to get there.

Apple starts on the back foot compared to Google with AR Cloud, so its approach was always going to be different. Apple is playing to its strengths by leveraging a subset of AR Cloud functionality on an app-by-app and session-by-session basis. With multiplayer AR (you and three friends) and app-specific persistence (saving the AR Cloud state of your AR app for your next session), Apple’s simpler approach gets it to market quickly. While the current lack of geolocation makes this an incomplete AR Cloud challenge to Google, Facebook, Niantic, Tencent and AR Cloud startups, Apple has done enough for brands like Lego to surprise and delight. And who doesn’t love Lego?

USDZ is not a four letter word 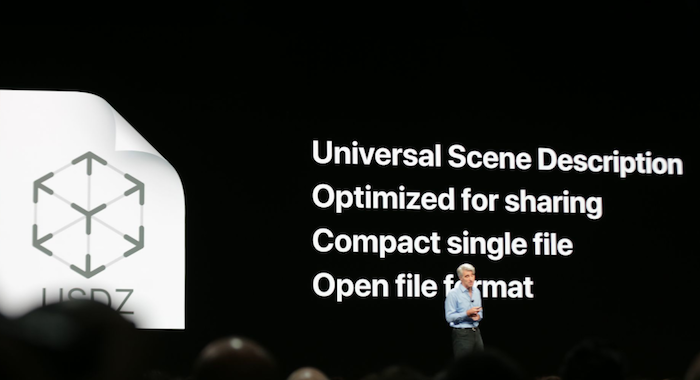 But USDZ is an open file format, a shift from Apple’s often closed ecosystem playbook. Launching USDZ as an open standard with Apple at its core and support from partners like Adobe, Autodesk, PTC, and Sketchfab, USDZ is more of a Googly thing to do. And Google looks more like USDZ’s target.

Despite Apple’s short-term advantage with ARKit in terms of installed base this year and next year, Google is ideally positioned to enable the largest mobile AR ecosystem with ARCore long-term. So by attacking Google in a different part of the stack with USDZ, Apple could be trying to shift that dynamic back in in its favor.

Facebook Camera Effects is not the same type of platform as ARCore because of its messaging dependence, but USDZ still constitutes a flanking attack on it. Apple’s eCommerce collaboration with Fender leveraging USDZ also showed how Amazon AR view and Alibaba’s sophisticated AR eCommerce initiative in China are at risk of collateral damage.

AR Trek: The Next Generation

We’re in the earliest days of AR across both mobile AR and smartglasses, and despite our forecast of 900 million mobile AR installed base across ARKit, ARCore and Camera Effects by the end of this year, we don’t see 2018 as the year of AR/VR yet. Revenue could begin to accelerate next year, and reach an inflection point if Apple launches smartphone-tethered smartglasses in 2020 as we forecast.

Apple’s WWDC salvos were a series of surgical strikes on its major AR competitors, so those cute Memoji and Animoji faces shouldn’t lull anyone into a false sense of security. Two and a half thousand years ago, Sun Tzu wrote that “to subdue the enemy without fighting is the acme of skill.” Tim Cook’s got skills.