There are 36,000 families (and rising) who can thank mobile data visualization for helping to save their lives, and it all started with a provocative yet simple proposal.

“How would you like to help us eliminate malaria in Zambia?”

That’s the pitch received by Neal Myrick, director of social impact at Tableau when PATH — an international nonprofit organization that focuses on saving lives and improving health, especially among women and children — came knocking at his door. This wasn’t a demand for monetary aid. It was a request for collaboration.

“When you go into a project with that mentality — being involved in the project itself, rather than just funding it — it helps us as much as it has helped them,” Myrick told me at Tableau’s offices in Seattle. “We’re there to do our part and support them.”

Despite medical progress, malaria is still a huge killer worldwide. According to the World Health Organization (WHO), the number of malaria deaths fell from an estimated 839,000 in 2000 to 438,000 in 2015. While a decline of 48 percent is impressive, there is still much to do, and most of the deaths in 2015 were in the WHO African Region (90 percent, in fact).

Mobile data, including location-based information and surveys, is playing a key role in helping Tableau and PATH eliminate malaria in the region.

The story starts with data collection, both in paper form and via mobile devices. Looking for developing disease transmission patterns and overlaying data on maps to show movements and travel patterns, a story starts to emerge.

“We were able to isolate some of the highest infection areas — unsurprisingly, along a large lake on an international border — and see how those folks are traveling through the area,” Jeff Bernson, director of results management, measurement, and learning at PATH, told me. “Remember, the malaria parasites spend most of their lives as stowaways in asymptomatic people. By understanding the travel patterns of people throughout the province, the Ministry can better manage both prevention and treatment programs across those corridors.”

Early on in the project, these visualizations helped focus resources in exactly the right locations.

“Once we understand the travel patterns, we can also model out the data to understand the compounding benefits of concentrating our efforts on select districts within the province,” Bernson said. “The Ministry can now make resource allocation decisions with a precise understanding of the first-, second-, and third-degree benefits.”

As the partnership to end malaria expanded, holding the data at local centers started to become crucial and opened up new eradication possibilities.

“Before, you could see malaria cases across the entire region, but you couldn’t see it at a district level,” Myrick said. “By localizing data and providing the best information on a local area-by-area basis, they can be more accurate with the allocation of limited resources.”

The results are clear for all to see. In two rainy seasons, cases of malaria have been reduced by a staggering 93 percent. 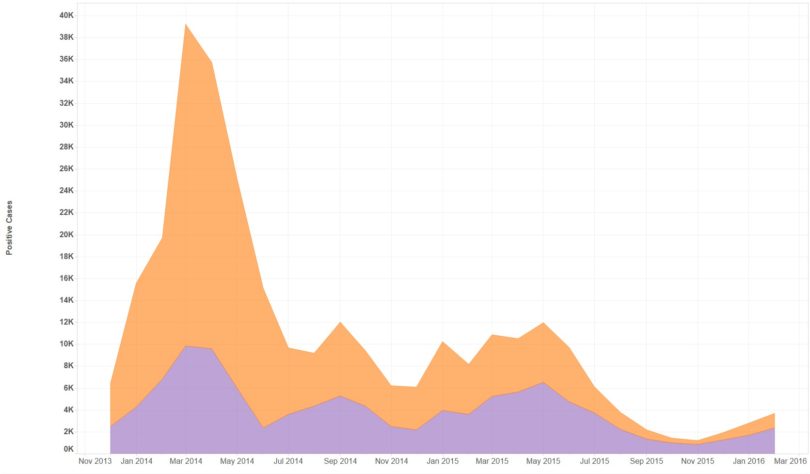 “We’ve made great strides so far that indicate we’re on the right track,” Bernson said.

You see that big orange spike in early 2014? That is the height of Zambia’s rainy season when the mosquitos thrive. In 2014, as the Community Health Worker program was just mobilizing, the Ministry was able to see that the problem reached far beyond the cases that the district health centers were seeing. But with that more localized data, they were also able to detect and treat more that half of the overall cases detected in Southern Province during the transmission season. Now look at the same stretch in 2015. No big spike. Continued testing across the districts showed far lower incidence of the parasite in asymptomatic carriers and fewer outbreaks overall. This is why we are so excited.

The effort involved here is not insignificant, of course.

Data is recorded in facility registries and logbooks, with weekly reporting of simplified malaria information sent by mobile phones with Java-based data entry forms, via data-enabled mobile telephone networks, and to a centralized data server with pre-programmed data quality and analysis functionality. The result? Critical information and reports are sent back to those who need to see them in near real time. 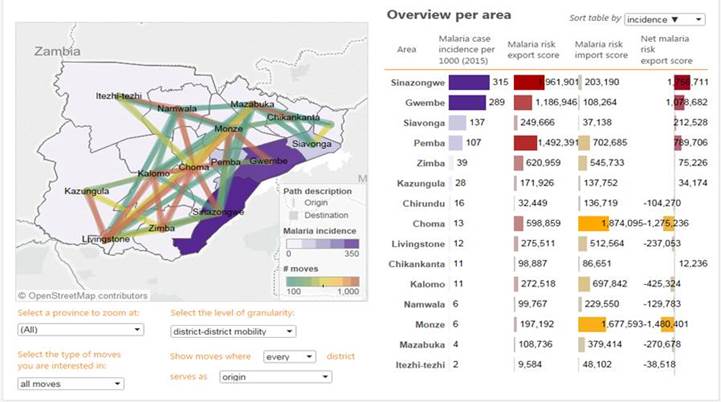 And Tableau’s efforts go beyond just providing the technology. Eight people have been meeting weekly for a year, doing pro bono work to find and structure the data, produce visualizations, and discover patterns. Tableau has also committed to providing two people on the ground in Zambia and providing pro bono product support.

The data in this part of the story focuses on the southern province of Zambia, home to over 1.8 million people in a country that has a population of 14.5 million. But eradicating malaria is as important for the economy as it is for the people affected by the disease.

A recent report released by the Bill & Melinda Gates Foundation (in conjunction with the United Nations) estimates that the eradication of malaria would save 11 million lives over the next 25 years and unlock a staggering $2 trillion in economic benefits.

With experts estimating that an annual spend of just $5.1 billion would be necessary to eliminate malaria as a serious public health threat, the math works out in everyone’s favor.

“PATH’s work in Zambia has actually been really illustrative as we look at the broader world of Global Health programs,” Myrick said.

Over the past year, we’ve started working with members of the Asian eHealth Information Network and other governments in Africa quickly to increase the analytics competency of health ministries around the world as part of our commitment to the Global Health Security Agenda. With so many more data collection tools available — driven by the growing number of mobile survey apps — there is huge potential to solve major global health issues if we can make the connections between collection, storage, and analysis as accessible and reliable as possible. So what lies ahead for the Zambian project, and where does the partnership to eradicate malaria through reliable data go next?

“Next will be to establish as accurate a topographical structure as possible, which means that we can get extraordinarily granular with the data,” Myrick said. “With mobile location data, we can then work out movement patterns and add in predictive modeling on weather data (humidity, for example) — house by house, village by village. They’ll be able to establish clean houses, expand to clean villages, and ultimately to clean towns. People will know what precautions to take, as we’ll know which locations have the highest risk, based on data visualization.”

And that’s not all. There are other ways that mobile devices can help reach 100 percent eradication.

“Mobile technologies could also potentially be used to prevent malaria in other ways,” Duncan Earle, MACEPA director for country programs (MACEPA is the Malaria Control and Evaluation Partnership in Africa), told me. “For example, information and behavioral messages targeted to individual cell tower coverage populations could focus mobile alerts during outbreaks.  Welcome messages upon crossing borders could remind people of the country’s commitment to elimination and share health messages. Better data and visualizations will help us to understand how close we are to zero and to maintain it with a robust surveillance system once we get to elimination.”

And then there is Zika, another mosquito-borne disease that is making the headlines on an almost daily basis.

The partnership is set to give a presentation on this project and explain everything it has learned about other mosquito-borne illness — including Zika — at SXSW Eco in October.

What started with a simple request has become a five-year plan to eliminate malaria in Zambia by 2020, which would make it the first sub-Saharan African country ever to achieve this lofty goal.

But with mobile data, information visualization, and the diligence on display at Tableau and PATH, that dream is closer to reality than ever.