In 2008, a French engineer in Silicon Valley started a newsletter about a fascinating new slice of the technology market: mobile apps. Today, his company regularly drives 250,000 downloads for featured apps — and sometimes more than 500,000 — for developers willing to pay the price.

“It started like Craiglist … a daily newsletter every morning with my picks,” AppGratis founder Simon Dawlat told me this morning from a snowy Paris. “I knew a lot of developers, and offered some deals.”

The newsletter quickly went to the web, and two years ago from web to a mobile app (kind of a no-brainer when you consider that the entire company is about mobile apps). Dawlat thought the app store was going to be huge, but that someone had to take care of the “pain in the ass” markets.

Those markets are the ones that are generally forgotten: Belgium, the Netherlands, Luxembourg, and other smaller European nations. Plus, of course, the Germanys and Frances of the world that don’t immediately get served with an English-first (and sometimes English-only) strategy. It turns out that focusing on niche paid off, big time. 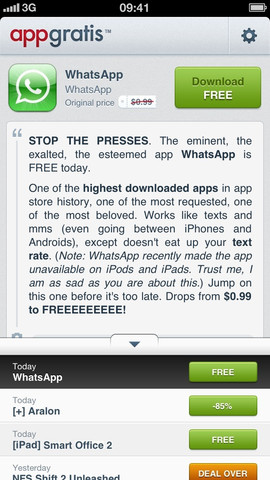 What AppGratis created is a community of customers who were interested in mobile and wanted more apps. AppGratis gave that to them — for free or reduced rates. (Hence the “gratis” part of AppGratis.) Six million people currently have AppGratis installed, and a million open it every single day. Of those, 25 percent to 40 percent actually download and open the currently featured app.

After gaining a foothold in Europe, AppGratis moved to other underserved markets: Brazil and Mexico. Currently, the company is at 30 countries worldwide, including the United States, where AppGratis launched just yesterday.

“We’ve created a self-learning algorithm,” Dawlat said. “When you start using the app you have the basic app set everyone has, but the more you use it the more we know what you like, and we can recommend apps to you.”

Those apps aren’t just automatically referred to you — there’s a team of 20 editors in Paris focusing on curating the best apps and bringing the best app deals to AppGratis users. Those 20 will soon be bolstered by a team in New York, a team in San Francisco, and São Paulo.

“We want to have local people in every significant market,” Dawlat told me.

So how do you get featured on AppGratis?

It starts with not sucking. Those app editors in Paris are looking for quality — AppGratis has featured the likes of Spotify and Flipboard. But it does includes some sucking up. Dawlat gets dozens of emails a day from developers desperate to be featured in AppGratis.

And yeah, it does take some cash.

While AppGratis makes a lot of its money straight from Apple in form of affiliate commissions, developers can pay between $1 and $2 per install. That’s a pretty standard pay-for-install price, but the price varies depending on the market, on whether you’re targeting iPhone (which has higher average revenues per user) or iPad, and other factors.

But if you want instant iOS traction, AppGratis is a very interesting option. And possibly, in the future, on Android as well.