New research from Juniper Research says that more than 1.5 billion — or about 1 in 3 — boarding passes will be displayed on mobile devices like phones or tablets by the end of 2019.

That’s way up from just 745 million boarding passes that will be delivered on mobile devices this year, the firm estimates.

The study shows that mobile boarding passes are increasingly used by frequent flyers. But, Juniper says, leisure passengers are less likely to use them, owing to the fact that they’re less familiar with the technology. 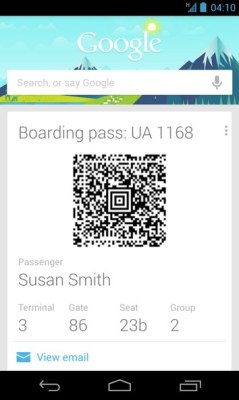 According to airline IT specialist SITA, 53 percent of airlines have already implemented mobile boarding passes via apps. This number, SITA believes, will rise to 91 percent by 2017.

The study says app-based boarding pass adoption is happening fastest in the U.S., Asia, and Europe.

But most of the airline apps are delivering boarding passes as bar codes. Using a near field communication chip in the phones to transmit the boarding data is the way of the future, but the transition to that technology is moving slowly, Juniper says.

“The ultimate position that NFC can reach in the airline industry is ‘the extinction of the boarding pass’ whereby boarding pass, baggage tickets, and identity information can be stored on the phone and simply accessed using NFC readers,” says Juniper researcher Nitin Bhas. “However, this transition will not only be delayed by the success of bar code but, there is the need to gain agreement and investment from airlines and airports around the world.”