Mobile technology has been one of the biggest drivers of growth in the tech sector since the iPhone’s launch in 2007. But if Digi-Capital‘s predictions hold water, you ain’t seen nothing yet.

According to the research and advisory firm’s latest Mobile Internet Investment Review, investors plowed more than $32 billion into mobile tech companies in 2014. 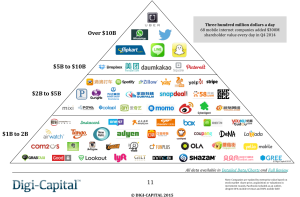 Above: These 68 companies have $1B+ valuations.

The most valuable of those companies — the 68 mobile “unicorns” with a valuation of $1 billion or more — added $28 billion to their combined value in just the fourth quarter to reach a total of $261 billion.

“To put the $28B value added last quarter in perspective, that’s $300M [per day] — or more than 30 Tim Cooks (who got paid over $9M last year) a day,” said Tim Merel, the managing director of Digi-Capital.

“But it wasn’t all plain sailing, as fourteen of the billion-dollar companies lost value (in some cases multiple billions of dollars). Admission also doesn’t guarantee lifetime membership, with two former unicorns falling below $1B in Q4 for a total of five dropouts last year.”

You might think that these unicorns are the cream of the crop, and you’d be right. But even within this exclusive club, there’s a tier of truly successful elite companies.

Just 20 of those 68 billion-dollar mobile companies account for almost 70 percent of the entire group’s value, or $178 billion of the $261 billion total. Those top 5? Uber, WhatsApp, Twitter, Flipkart, and Snapchat. 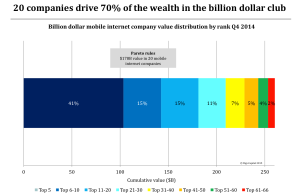 Above: The Pareto principle at work: The top 5 mobile unicorns account for 70% of the value.

Digi-Capital predicts that revenue from the mobile Internet will top $700 billion annually by 2017, more than tripling its 2014 figure. The vast majority of that, $500 billion, will come from m-commerce, or purchases made by people using their phones to order things online.

There are some other intriguing data points in this report. Not surprisingly, Android app downloads greatly outnumber iOS app downloads, while iOS apps are far better at making money. That’s a story we’ve been hearing for a couple of years now.

But what surprised me is that the Google Play store only accounts for a minority of Android app downloads worldwide. Google Play has 20 percent of overall downloads, while iOS has 17 percent — but competing Asian Android stores are close behind, with Baidu at 17 percent, Tencent at 16 percent, and Qihoo at 11 percent. 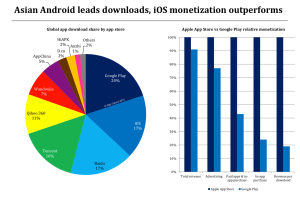 Above: Android and iOS app store market shares and monetization, 2014.

Not surprisingly, mobile games dominated mobile app revenues, with 74 percent of the total.

And if there’s a power law operating in the valuations of the biggest mobile companies, it’s an even more powerful effect when you examine the performance of the top mobile apps. For instance, the top 1 percent grossing apps have 35 times more sessions per day than the top 5 percent, and 20 times the customer lifetime value. That’s an enormous differential that shows where the money is mostly going in this market.

The question, then, is how to capture some of this epic growth. That’s where VentureBeat’s Mobile Summit comes in. I’ll keep my pitch short: This small, invitation-only event that we’re hosting next week will bring 180 of the top mobile executives, founders, and investors into one place to talk about ad tech, user acquisition strategies, how to make the best use of mobile data, and how to optimize and personalize apps for your customers.

And Digi-Capital will be giving a detailed, 47 page summary of its extensive 578 page report to all attendees.

If you’re in the mobile industry and want to find out how to get on the leading edge of the growth curve described in these charts, the Mobile Summit is well worth the price of admission. I hope to see you there.