Mobile messaging giant Line has announced that it now caters to conference calls with the latest update to its mobile and desktop app. 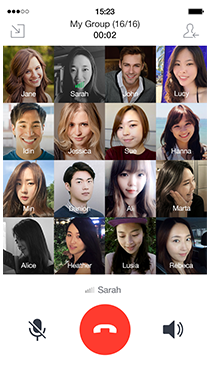 Available on Android, iOS, and Windows desktop (Mac will be added soon), the new group-call feature supports up to 200 people and is aimed at anyone from families and friends to business people. Interestingly, Line is first launching the feature outside the company’s native Japan, and Thailand, Taiwan, and Indonesia will also have to wait for the service to arrive. These are Line’s core markets, so it feels like Line is essentially beta-testing the feature globally in its less-popular markets — basically everywhere outside of Asia.

Line rose to prominence back in 2011 for its WhatsApp-style messaging app, which today claims more than 200 million monthly active users (MAU) in 200 countries — as noted already, the majority of those users exist across Japan and a handful of Asian countries. Earlier this year, Line launched a new universal iOS version of its flagship messaging app, and the company later revealed it was shuttering MixRadio — 14 months after buying it from Microsoft.

With competitors such as Facebook-owned WhatsApp going from strength to strength globally, Line is struggling to grow its user-base — and the West is proving a tough nut for the company to crack.

Line has also expanded into other services, such as mobile payments, taxis, and other standalone apps, and the company is now a leading contender to go public, with rumors recently surfacing that a dual IPO in New York and Tokyo is in the works.

The group calls feature is genuinely useful, though Skype already offers such a service, albeit with a limit of 25 people. Granted, group calls of 200 people could prove a little tricky to manage, but some companies (or very, very big families) may find it useful. Skype also recently went one step further by introducing group video calls to the mix.