A new report by eMarketer forecasting physical, online, and mobile sales of music through 2011 paints a bright future for mobile music sales, and music labels seem to agree. 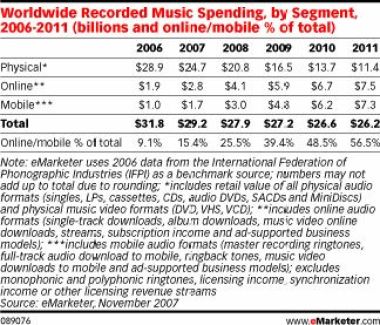 The most striking fact is the prediction that by 2011, the majority of music sales, 56.5 percent, will be online or mobile, with physical music sales falling by nearly two-thirds from 2006 to 2011. Also worth noting is that by 2011, mobile music sales will draw nearly even in sales to online — $7.3 billion in mobile sales versus $7.5 billion online. Scarier for the music industry as a whole, however, is that total music sales will decline by over $5 billion dollars from 2006 to 2011, with the skyrocketing growth of online and mobile failing to replace to revenue lost to slumping physical sales.

Nokia’s Comes With Music plan, which promises users of Nokia Music Store-compatible handsets a year’s worth 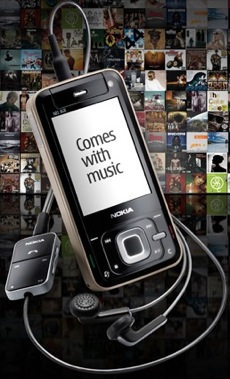 of free downloads, has proved attractive to labels worried about these falling revenues. Warner Music Group, the third-largest record label, announced on Monday they would be releasing their catalog to the Finnish handset manufacturer. This means three out of the Big Four record labels, Universal, Sony BMG, and now Warner Music Group, have released their catalogs to Nokia’s program. The last remaining holdout, EMI, is said to be in licensing talks.

What’s attracting them? Perhaps the fact that the labels are taking a pound of flesh from Nokia in the deal. The Register reported in April that Nokia’s agreements with labels means the company must offer a wholesale per-unit price after a set number of downloads, rumored to be 35. In other words, in addition to the per-handset fee Nokia is already paying to labels, if any Nokia handset users decides to download more than 35 songs, Nokia must pay extra. And remember, these downloads will be free to the user, meaning there’s little reason not to download as much as possible. As the Register puts it, “Nokia is left with a crippling liability, which punishes it for the very user behaviour it’s trying to encourage.”