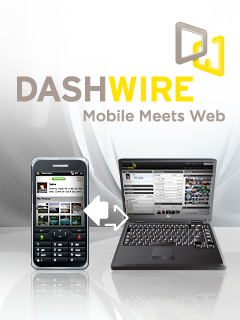 Dashwire, a program that lets smartphone users access and use their mobile data from the web, released a new version yesterday, and it looks really, really nice. We’ve written about Dashwire before as part of the growing group of programs that let user protect their mobile contacts should they lose their phone and migrate their data between carriers. But Dashwire 2.0 deserves a separate mention.

While Dashwire 2.0 looks significantly more polished than its predecessor, that’s not the big difference. Dashwire 1.0 was mainly about being able to send your mobile data for safekeeping to the web, but the new version is about how much you can use on the web from your phone. Users can update their Twitter and Facebook status, upload media to Facebook, Flickr, Twitter, Bebo, and FriendFeed, and use Dashwire for mobile media editing and blogging. In addition, there are still some very swank features from Dashwire 1.0, including visual voice mail, the ability to respond to a mobile text from the web, and automatic transfer of contacts and settings from phone to phone.

Dashwire is free to use and download and is currently available for phones running Windows Mobile 5.0 or 6, with a planned roll out to recently-acquired Symbian S60 in Q3 of this year. You can watch a video demo of some of Dashwire’s functionality here. The Seattle-based company was founded in August of 2006 and has raised about $1 million from angel investors.