Mobile video ads could be the final frontier in the nascent mobile advertising space.

U.S. ad firms and marketers will spend about $1.5 billion on mobile video adds by the end of 2014, up from the $722 million spent last year. Mobile video ads accounted for nearly 19 percent of all digital video ad spending last year, a number that will climb to nearly 26 percent by the end of this year, according to eMarketer principal analyst David Hallerman.

“And by the year 2018, the number will quadruple to over $6 billion. This is huge growth,” Hallerman said.

“And let’s look at the big picture,” he added. “Mobile video ads are important.” 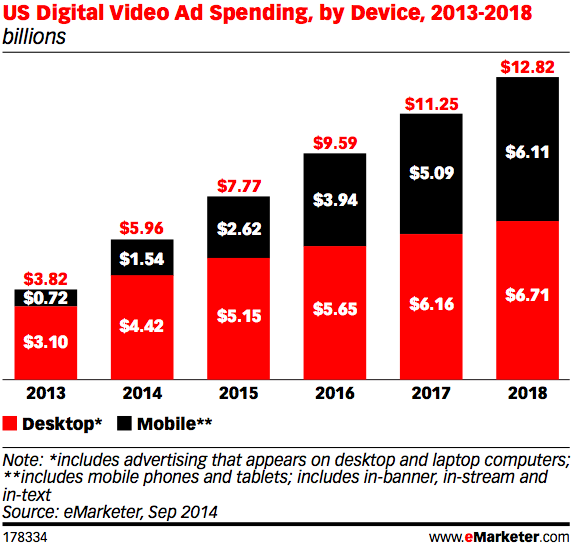 Incredibly, there are no clear leaders in the space, unlike straight mobile ads, which Google dominates. Facebook is No. 2 in the space, followed by Twitter. The latter two companies posted astronomical growth in the mobile ad space in their second quarter results.

Video ads are key to game monetization and even mobile user acquisition,
VB research has found

“The thing that holds mobile video ads back is the frustration of watching video on slow 3G networks,” Hallerman said. “Changes need to made by the Verizons and AT&Ts of the world in order to deal with this.”

To be sure, the mobile ad sector itself is enormous and growing at an astonishing rate. Around 500 players live in the ecosystem, including mobile marketers, ad brokers, exchanges, data-analytics and gaming firms, and others. But not so for the mobile video space.

Analysts said the mobile ad ecosystem was worth more than $17 billion last year. By the end of the 2014, that number is expected to crest to $35 billion. But the mobile video ad space is different, and wide open, which is what makes the space so attractive to those wishing to become serious players.

“There is no one company that rules. Therefore, because it’s not being dominated, it’s very attractive for vendors and ad sellers. There’s no clutter in the space and nobody keeping anybody from the playing field,” Hallerman said.