Imagine a Mac Mini that’s completely wireless and can project a large image on a wall instead of relying on an external monitor. This Mac may sound like science fiction, but it actually may not be that far off.

Apple today has received U.S. Patent No. 8,610,726, “Computer systems and methods with projected display,” reports Apple Insider. It offers a glimpse at a new face of computing that isn’t shackled down by traditional monitors and which could potentially do for in-home projectors what the iPhone did for smartphones.

The patent describes a featureless computer box, dubbed a “desk-free computer,” with a laser projector system built-in that can produce a 40 inch image from under 15 inches away. It connects to all of its accessories wirelessly, and it also supports inductive wireless charging (so you can just place it on a wireless charging surface to receive power). Apple could potentially include a battery in the computer as well. 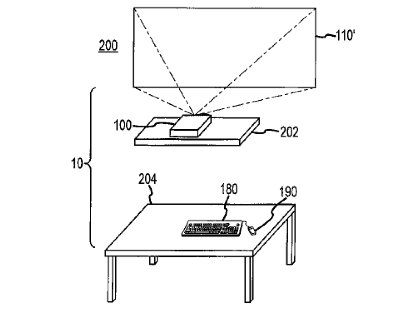 Above: A patent illustration from Apple’s so-called “desk-free” computer.

It sounds like Apple is developing an entirely new type of computer format — one that’s more flexible than a laptop since it can produce a large screen but that’s far more portable than a traditional desktop.

Today’s projectors are typically large, based on LCD or DLP projection technology, and require bulb changes every few years (depending on how much you use them). Laser projection, on the other hand, could provide for smaller and brighter projectors that don’t need expensive bulb replacements (indeed, that would be essential for Apple’s desk-free computer idea).

It also sounds like Apple is pushing beyond what we expect of typical projectors. The patent describes sensors like an accelerometer that could help the computer automatically adjust its projected image depending on its orientation. That could be especially useful when installing the system at an angle. Projectors today have methods of tweaking images, but they’re mostly manual — not the sort of thing most consumers would want to deal with.

While we may not see a computer exactly as this patent describes, it’s a reminder of how essential projectors could be for consumers in the future. Who needs a large monitor cluttering your desk when you can just shoot an image on a wall or screen at the edge of your desk? Projectors could also be more enticing in the living room as HDTV innovation slows down (we’re now waiting for 4K TVs to hit the market, but most consumers likely won’t bite since they offer minimal visual improvements over current HDTVs).

This projector-powered computer system also makes far more sense for Apple than the rumors of a standalone Apple television set.