If you feel like everybody is in a rush in Silicon Valley and in the modern world of technology, you can thank Gordon Moore, the chairman emeritus of Intel. Fifty years ago, he made a prescient observation that electronics would improve on a regular timetable. It came to be known as Moore’s Law, and it still holds true today.

Moore predicted 50 years ago, in the April 19, 1965 issue of Electronics magazine that the number of transistors, or on-off switches on a chip, would double every year. In 1975, he tweaked the prediction to doubling every two years. And that prediction has proven remarkably accurate.

Because the silicon chip is the foundation of everything electronic, improving a chip’s capability — to be smaller, faster, cheaper, and more powerful — always meant that next year’s model of computers would be roughly twice as powerful as last year’s.

But Moore’s Law isn’t foreordained. It is carried out only through the ingenuity of humans, the collective intelligence of the people in the $300 billion chip industry, and the larger $1 trillion electronics industry that makes use of those chips and finds more and more uses for them.

For those that kept up with Moore’s Law, the riches followed. Intel, which Moore cofounded in 1968, is now valued at $153 billion in the stock market.

“No single thing has had an effect of such great magnitude in so short a time as Moore’s Law,” wrote Dan Hutcheson, a longtime semiconductor analyst and head of market researcher Wesrch. “It’s played a significant role in advancing most of mankind’s endeavors, while improving our lives, over the last fifty years. It’s also critical to the semiconductor industry’s business model.” 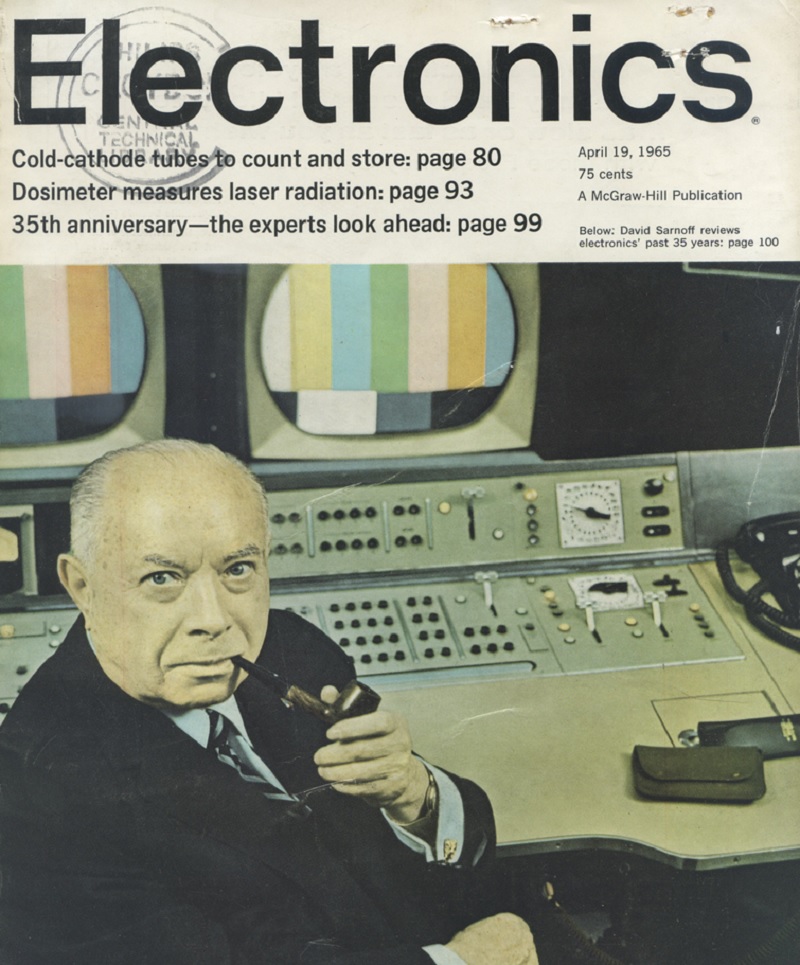 Above: The magazine Moore’s Law appeared in.

In Moore’s own words

In an interview provided by Intel and the Chemical Heritage Foundation, Moore said earlier this year that Electronics magazine wanted him to look 10 years into the future.

“So I took the opportunity to look at what had happened up to that time,” Moore said in the interview. “This would have been in 1964, I guess. And I looked at the few chips we had made and noticed we went from a single transistor on a chip to a chip with about eight elements – transistors and resistors – on it.”

He added, “The new chips coming out had about twice the number of elements, about 16. And in the laboratory, we were creating chips with about 30 elements and we were looking at the possibility of making chips with twice that many, around 60 elements on a chip. Well, I plotted these on a piece of semi-log paper starting with the planar transistor in 1959 and noticed that, essentially, we were doubling every year. So I took a wild extrapolation and said we’re going to continue doubling every year and go from about 60 elements at the time to 60,000 in 10 years.”

In 1971, Intel’s first microprocessor, the 4004, had just 2,300 transistors. Now Intel’s fastest Xeon chip and Nvidia’s newest Titan X graphics processor have more than 8 billion transistors. The new ones can do far more than the original calculator chip.

While the observation now seems obvious, it wasn’t at the time, since chips were not moving forward at the pace that Moore described. He made the prediction three years before he cofounded Intel, which helped Moore’s Law become true and became the world’s largest chip maker. Intel factories produce over 10 billion transistors every second today.

“I was just trying to communicate the point that this was the direction semiconductors were going,” Moore said. “And this was going to give a tremendous cost advantage, which wasn’t true at the time. The early integrated circuits cost quite a bit more than the pieces to assemble the similar circuits out of individual components.”

He essentially wanted to say that the silicon technology was going to make electronics cheap. He didn’t anticipate it continuing for a thousand-fold increase in complexity.

“I just thought it was a general trend we were going to have. But in fact, it was far more accurate than I could have anticipated,” he said. “And at the end of the 10 years, if we didn’t have 10 doublings of the number of elements on a chip, we at least had nine. So one of my colleagues – I believe it was Carver Mead, a professor at Cal Tech – dubbed this ‘Moore’s Law,’ a name that has stuck beyond anything that I think could have been anticipated.” 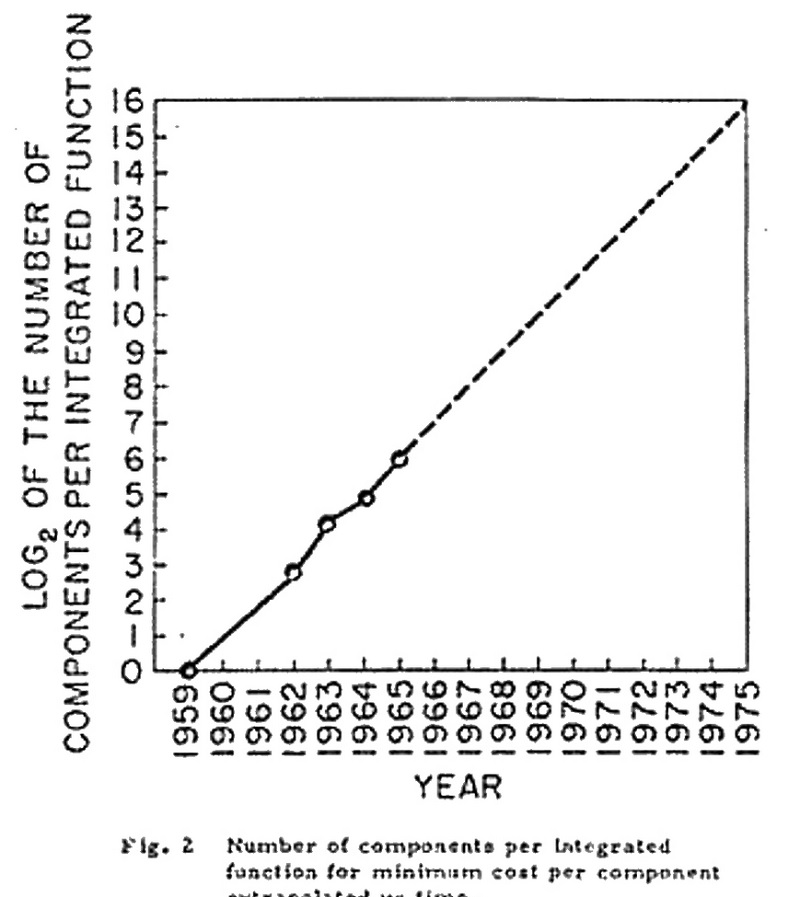 The impact of Moore’s Law

For Silicon Valley, Moore’s Law came to be interpreted as a pace of innovation that chip makers had to stay on in order to stay technologically relevant. For product creators, it was something they had to take into account when designing their products.

“So it went from a way of measuring what had happened to something that was kind of driving the industry. You had to be at least that fast, or you were falling behind,” Moore said.

Moore said he updated the observation in 1975, and then just let it be. He didn’t think it would last so long. 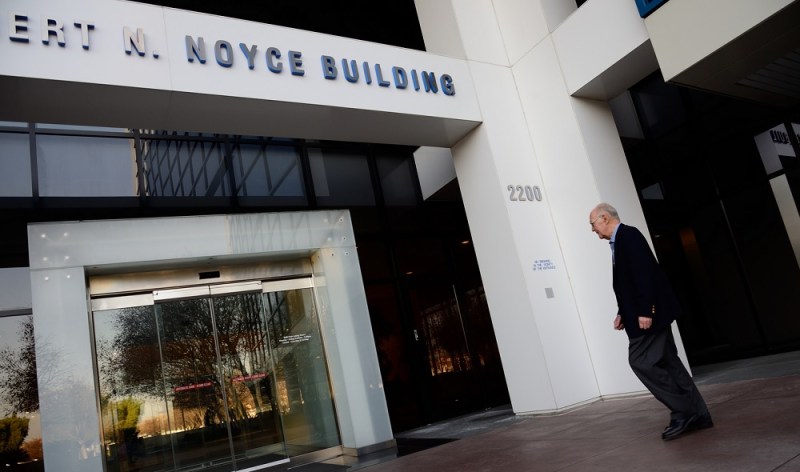 The consequences of being right

Intel and Moore have had a lot of fun talking about the exponential increases that Moore’s Law has made possible in technology. They note that if car fuel efficiency improved at the same rate, then a person could easily drive a car for his or her entire life on a single tank of gas. And at the pace at which transistors have shrunk, your car would be the size of an ant.

And if a skyscraper fell in price at the pace of Moore’s Law, a person could buy one for less than the cost of a PC today. If house prices fell at the same rate as transistors, a person could buy a home for the price of a piece of candy. And if the Apollo space program saw costs fall at the pace of Moore’s Law, could put humans on the moon for the cost of a small private plane.

Many of the devices around us today are powered by microprocessors made up of transistors. As these devices have dramatically decreased in cost and increased in performance and energy efficiency, thanks to Moore’s Law, they have become an indispensable.

If an Intel-based Android phone were built using 1971 technology, the phone’s microprocessor alone would be the size of a parking space. Today’s 14-nanometer processors deliver 3,500 times the performance of the original 4004, and they do so at 90,000 times the efficiency and at 1/ 60,000th the cost.

“It’s not obvious to me when it is going to end,” Moore said.

A lot of pundits have tried to predict when Moore’s Law would end. And technologists who warn that it’s about to end are often viewed with suspicion, even though the laws of physics say that they will eventually be right. Some believe silicon will run out of steam, and something else, like gallium nitride, will progress faster and create a new law with new materials.

Richard Doherty, a seasoned chip analyst at Envisioneering Group, thinks it’s about time some of the non-silicon technologies had their turn.

“The convenience and reliability of Moore’s Law has perhaps stalled or delayed many other technologies which might leapfrog the Moore’s Law value proposition,” he wrote. “Photonics, Carbon nanotubes, quantum computing and neural-cognitive logic will soon take off. And while they will certainly interoperate with silicon for many years, many of these may well see a quantum leap in performance, energy savings, fabrication costs, and combinations of the three.”

“I’m amazed at how accurate my application predictions turned out to be. In terms of an innovation that I didn’t foresee, I guess the one that really took me by surprise is the importance of the Internet. We knew computers did useful things. We knew they would improve at some rate once we got started. But I never realized how important they were going to be as a communications medium, driven principally by the Internet. I can’t think of another innovation that’s comparable.”

Moore still wants to inspire entrepreneurs and Intel employees to think about the long term. And he also wants to make sure that technology education is good enough to turn out the engineers we need to keep it all going.

“The good ideas often come from the young engineers and that’s going to continue to be the case,” he said. “They’re the ones often willing to make the real leaps that result in qualitatively different products and processes. Those of us who have been around too long think we’ve seen everything. And we kind of lose our creativity. So I believe that the universities are a very important part of the long-term success of technology. And similarly, companies like Intel are a very important part of the universities’ continued success.”