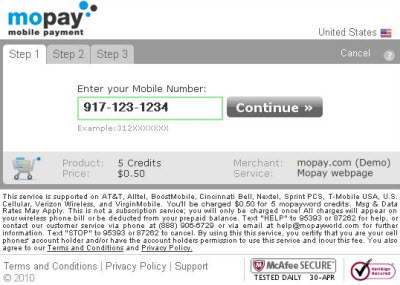 Mopay is announcing today that it has created a mobile payment system that lets you pay for physical merchandise with your cell phone in online transactions in 28 countries.

The Munich, Germany company says that we’re on the cusp of a big market where mobile carriers will let you use a cell phone number for the purchase of physical goods online.

Such payments are common in some Asian countries now, where phones are equipped with the right chips and retailers have scanners that can process the transactions. But widespread usage is still limited, particularly in North America and Europe.

Cell phone numbers can already be used to pay for virtual goods, such as decorations inside a social game on on Facebook. Companies such as Boku and Zong enable you to complete such a transaction by giving your cell phone number when prompted to make a payment. The transaction is then put on your mobile phone bill. In most countries today, purchases are limited to $25 or less.

Mopay has been handling digital goods purchases for the better part of a decade and has more than 400 customers that reach 3.3 billion people. Now, with physical goods, the process works in a three-step process.  Once Mopay is selected as a form of payment, the consumer enters his or her mobile phone number when prompted.  Second, the consumer will receive a special pin number via text message. Third, he or she will enter that pin number in the designated field on the Web site, which will complete the transaction.  The purchase is then billed directly to the buyer’s mobile phone account.

With Mopay’s new physical good service, mobile payments are moving one step further by enabling any kind of purchase in an online transaction, said Kolja Reiss, managing director of Mopay (which spells its name mopay). The last major step, which Mopay is not taking yet, is to allow physical purchase of goods inside retail stores.

Market researcher ABI Research recently estimated mobile payments in the U.S. could reach $2.4 billion in 2010, growing by 100 percent in one year but still representing only 8 percent of the total projected e-commerce market. In Japan, where physical goods billing is common, mobile payments make up almost 20 percent of e-commerce.

Mopay’s existing customers include Bigpoint, Gameforge, Innogames, Sulake and Travian. The company is a division of MindMatics group and has nearly 100 employees. It has an office in Palo Alto, Calif., and is hiring this year. Investors include T-Venture (the venture capital arm of Deutsche Telekom), Holtzbrinck Ventures (one of Germany’s largest start-up investors) and Tempo-Capital (a U.K. based financial investor).