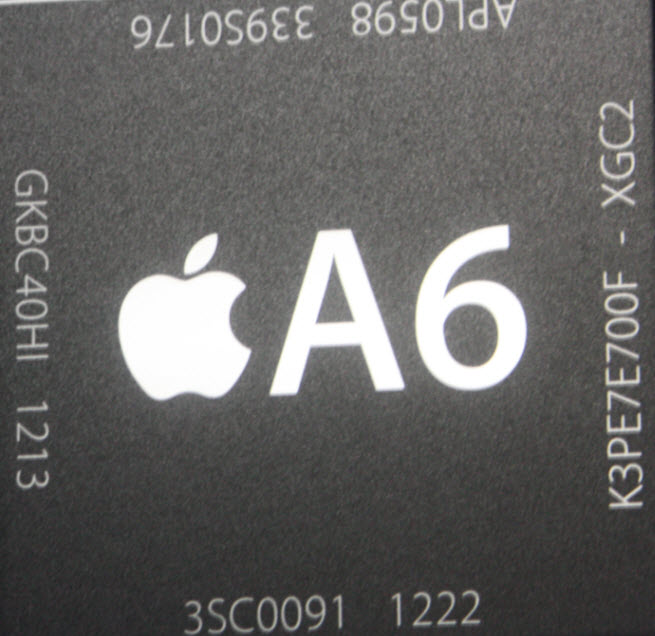 Apple’s A6 processor is the result of years of effort that has its roots in Apple’s efforts to achieve independence from its chip suppliers.

As noted in a post by Anandtech, the evidence is growing that Apple took the added trouble of not only designing its own ARM-based chip, it also created a customized core (the central processing brain inside the chip) for the A6. This is according to a post by Lynley Gwennap, head of The Lynley Group, a chip market consultancy. Gwennap believes the A6 has a dual-core design running at 1.2GHz. Gwennap says that Apple has spent $400 million on chip company acquisitions and probably another $100 million on four years of chip development, bringing its total investment to $500 million.

That’s probably a small price to pay for independence from chip manufacturers, who would charge Apple a 30 percent margin or more on every processor they sell. Apple’s independence movement stretches back to its $278 million acquisition of PA Semi in April 2008. This kicked off an attempt to become independent of chip suppliers such as Intel and Samsung. PA Semi’s team was a veteran group of chip designers led by Dan Dobberpuhl, who led the development of Digital Equipment’s StrongArm processors in the 1990s. PA Semi created a PowerPC processor under the leadership of Jim Keller and Pete Bannon. But Apple’s deal with Intel to use x86 chips in the Macs disrupted PA Semi’s plans. Within a month of acquiring PA Semi, Apple secretly signed an architecture license with ARM that allowed the company to develop its own ARM-compatible CPUs (central processing units).

Under then-CEO Steve Jobs, one team worked on the Apple A4 chip using an ARM CPU chip core, while another began defining the microarchitecture for a new CPU. In March, 2010, Dobberpuhl left Apple, as did PA Semi chief operating officer Leo Joseph and vice president of system architecture Mark Hayter. Keller and Bannon continued to work on the chip development and hired Gerard Williams, an ARM fellow and the technical lead for the ARM Cortex-8 and Cortex-15 CPUs. Apple could have chosen an ARM Cortex-A9 or A-15 for the A6 core, but it had the chops to do a more efficient, precisely defined core that did exactly what Apple wanted it to do and no more.

In early 2010, the team finished the microarchitecture design (akin to the blueprints) and began the physical design phase, where it laid out the exact structure of the chip. To bolster its physical design skills, Apple bought chip design firm Intrinsity for $120 million in April 2010. That gave Apple more talent to finish the A6, which was completed last summer.

Gwennap now expects Apple to use the A6 through 2013 and then launch a new CPU design in 2014. That one could be based on the 64-bit ARMv8 instruction set. Gwennap says he believes that Samsung is building the A6 in a 32-nanometer manufacturing process. (In that respect, Apple is not completely independent. It designs the chips, but has to rely on Samsung to make them). Gwennap said the A6 is similar in complexity and performance to the ARM Cortex-A15 and the Krait CPU that appears in Qualcomm’s newest chips.

To hit a 2X performance gain over the iPhone 4S (as Apple claimed at its press conference), Gwennap says Apple had to move to the two CPU cores at 1.2 gigahertz. Apple also said the A6 processor is 22 percent smaller than the A5. The A6 is 22 percent smaller than the A5, which means the chip size is about 96 square millimeters. That’s a fairly small size, which means the chip is manufacturable and lower in cost.

The size is bigger than simply taking the Apple A5X processor (used in the new iPad) and shrinking it from a 45-nanometer manufacturing process to a 32-nanometer manufacturing process, which would normally result in a chip size of 82 square millimeters. To get to that larger size of 96 square millimeters, Gwennap said that Apple must have added a more powerful custom CPU core as well as a better image processor for the camera. And that is the nature of chip design. For more explanation of the significance of this, see the passage on Moore’s Law at the bottom *.

* Moore’s Law, named after Intel chairman emeritus Gordon Moore, predicts that the number of transistors (basic electronic on-off switches) on a chip doubles every two years. This is possible because chipmakers use miniaturization technology to shrink the size of circuitry. The manufacturing takes place on the scale of a nanometer, or a billionth of a meter. A human hair is about 100,000 nanometers thick. In shifting from a 45-nanometer manufacturing process to a 32-nanometer manufacturing process, a chip maker like Samsung can shrink the circuitry and fit more transistors on the same-size chip. Or it can make a chip with the same number of transistors on a smaller chip. With smaller circuits, the distance traveled by electricity from one point to another within the chip is shorter. That means that the electrical circuits can be faster. On top of that, it takes less material to make a smaller chip, so the cost of the chip is also less.

In this case, Apple moved from 45 nanometers to 32 nanometers. That allowed Apple to cram more circuits on a chip and cut costs at the same time. It did so and added new capabilities to the chip, beyond what the older generation could do. In a couple of years, Samsung can move on to a new manufacturing process and Apple will probably be ready with a new chip design to take advantage of it. That’s how our new gadgets such as iPhones get more and more powerful and cheaper to manufacture.