Ad viewability is a big deal for advertisers, who prefer not to waste marketing dollars. So are fraud and ensuring that ads get shown to the right audience at the right time — audiences that an advertiser has paid for. 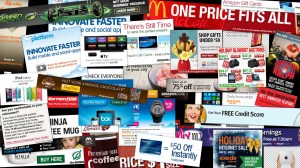 Above: ‘Half an hour of web ads’

That’s why GeoEdge is launching a mobile ad verification service. Interestingly, however, it’s initially targeted for publishers, not advertisers.

“As video advertising has matured, quality issues have grown increasingly more problematic,” said GeoEdge’s CEO, Amnon Siev. “We are extremely proud to be the first verification company to provide publishers with 360-degree ‎protection of display, mobile, and video ads.”

GeoEdge will enable publishers to guarantee advertisers quality standards on ads shown on their sites or mobile apps. That includes whether ads were played to their full length, that they didn’t autoplay with audio on — which users hate — and what exact length of video played. The company says it will even be able to ensure there’s no malware in ads that could cause issues with users’ phones and laptops.

This is important because of recent changes to the online and mobile ad ecosystems.

“It has always been an issue — but since websites started to sell their media through 3rd party agencies and the entrance of media exchanges, it has become a major issue,” Siev told me via email. “For most publishers it’s almost impossible to keep track of what ads are going on their website. And with the rise of video ads, the challenge became even more complicated.”

Recently, mobile advertisers have become more sensitive to these issues, and mobile ad networks have been responding.

As brand advertisers increasingly move to mobile — something we’ll be talking about at a VB research roadshow in New York mid-June — quality guarantees might be a feature of either the ad networks or the publishers who ultimately show the ads that they’ll be demanding.