I was surprised when Apple told me Wednesday that it had put an “Apple SIM” inside the new iPad Air 2, so that I wouldn’t have to order a SIM from my carrier and hope that it’s the right size. If you want to change carriers you do it in the OS, not by shuffling cards.

This, Apple explains, will make it easier for iPad Air 2 users either to turn on a temporary wireless service while they are traveling or to switch wireless networks easier at home if they decide they don’t like the service. 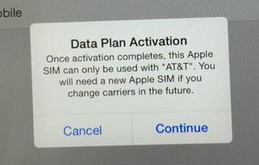 But AT&T has found a way to throw cold water on the innovation.

If you own an iPad 2 with AT&T service and you try to switch to another carrier, AT&T is requiring that you get a new Apple SIM. This defeats the whole purpose of an Apple SIM … which must have been AT&T’s intention.

This discovery was pointed out by AT&T’s number one critic, T-Mobile CEO John Legere, who commented on this on his Twitter feed earlier today.

As news gets out about AT&T’s approach to the Apple SIM, the carrier is likely to lose more consumer good will than it will save in dollars lost from “churn.”

AT&T spokesman Mark Siegel was frank about the issue with VentureBeat. He stressed that the iPad is still an “open” device and that users can change carriers whenever they want. Asked why AT&T doesn’t allow users to switch carriers via a settings tweak (as Apple intended), instead of having to change out the SIM card, Siegel responded: “That’s just the way we choose to handle it.”

The idea that Apple would introduce a neutral SIM card is testament to its own massive brand power, as well as how much less loyalty it has for its wireless carrier partners than it used to. At one time, AT&T had an exclusive on the iPhone and was involved with many of the key design decisions in the device.

No more. Today, in another small way, the Empire is striking back.