Morgan Freeman is lending his voice to popular GPS driving app Waze, meaning those in the U.S. can be given directions by the soothing, dulcet tones of the legendary Hollywood actor.

Freeman joins other big-name stars, including Arnold Schwarzenegger and Kevin Hart, who have added their voices to the navigation app in the past — in what is a key promotional tool used by film companies. Indeed, Freeman has a new movie due out in March: He’ll be playing Vice President Trumbull in London has Fallen. Naturally, when you enter the settings area to select his voice, you’ll see a marketing blurb for the upcoming flick. 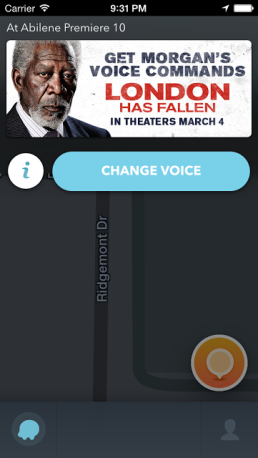 Founded out of Israel in 2007, Waze has built a solid reputation for its mobile apps that let anyone share real-time data on traffic and road conditions. It was the popularity of the apps, and the data they generated, that led Google to pay north of $1 billion to acquire Waze back in 2013, shortly before celebrity voices were first introduced to the mix.

While the current tie-in is merely a short-term offering to promote the film, Waze said that Freeman’s is among the voices most requested by its users, so this offer will prove popular for sure. It also serves as a reminder that despite the mountain of data Google garners from Waze to improve its other services, including Google Maps, good old-fashioned celebrity affiliations still speaks volumes in the world of mobile apps.