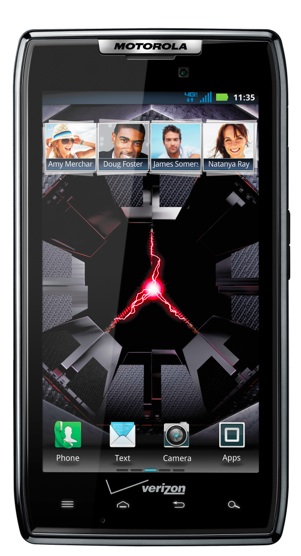 An unholy union between Motorola’s former and current top phone brands, the Droid Razr aims to be a reminder of what made the original Razr so cool (Look ma! It’s thin!) while also cementing Motorola’s role as a powerhouse Android manufacturer.

And thin it is: The Droid Razr measures just 7.1 millimeters, or about half the thickness of the popular HTC Thunderbolt. That’s impressive for an LTE 4G smartphone; they’ve traditionally been thicker than their 3G brethren.

The Droid Razr is powered by Android 2.3.5 “Gingerbread”, a dual-core 1.2 gigahertz CPU, 1 gigabyte of RAM, and it features a 4.3-inch Super AMOLED display. (A Moto representative wouldn’t confirm who makes the Razr’s screen, but my bet is on Samsung.) It sports a hefty 32 gigabytes of storage (with 16GB on-board, and a 16GB memory card), and also packs in an 8-megapixel camera capable of shooting 1080p high-definition video. There’s also a 2MP front-facing camera for video conferencing.

Motorola’s announcement wasn’t as impactful as it could have been, since details about the Droid Razr leaked yesterday.

For the most part, the Razr doesn’t sound that different from most other Android superphones. But there are a few interesting unique features: For example, it sports a water repellant nano coating that helps to protect the phone from rain and spills. It also feels sturdier than most other Android phones, with a fairly solid metal frame that sports Kevlar fiber on the rear.

Motorola also showed off its media synchronization tool, Motocast, which lets you effortlessly view and send media between the Droid Razr and your home PC. Sanjay Jha, Motorola Mobility chairman and CEO, showed off the feature on stage at a New York City event today, though he had a bit of trouble getting his phone to recognize the demo computer. Eventually, he had to swap to a different Razr unit to connect to the computer.

In my short hands-on time with the Razr, I found that it felt surprisingly light, especially compared to other LTE 4G phones on the market. The screen had an impressive viewing angle, and overall the device felt very solid — a big departure from Samsung’s plasticky Galaxy S I and II lineup.

The big problem with the Droid Razr is its price: $299 with a two-year contract. 4G LTE phones have typically retailed over $200, and it’s a fairly competitive price given the amount of storage it comes with. But with other attractive options like the Galaxy S II and iPhone 4S available for less, the Droid Razr may seem like a tough sell for many consumers.

Pre-orders for the Droid Razr will begin on October 27, and it’ll be available some time early November.