After roughly two years of development, rumors, and leaks, Motorola today officially took the wraps off its 5G Moto Mod — an accessory that adds next-generation 5G cellular capabilities to its new Moto Z3 smartphone. Both are starting out as U.S. exclusives for Verizon, with the Moto Z3 arriving August 16 at a $480 retail price, while the 5G Moto Mod is presently unpriced but expected to be available in “early 2019.”

The Moto Z3 follows up last year’s Moto Z2 as a near-flagship device, with hardware specifications that slot just below the recently announced Moto Z3 Play. It sports a six-inch, 2,160 x 1,080 resolution Super AMOLED display with an 18:9 aspect ratio and minimal bezels, an 8MP front-facing camera, and no home button — the fingerprint scanner is integrated into a side-mounted power button.

Around back are a pair of 12MP cameras (one RGB and one monochrome) integrated with Google Lens, Google’s computer vision-powered search assistant, plus magnetic pins compatible with Moto Mods, Motorola’s lineup of backpack accessories. Inside, there’s a generation-old Qualcomm Snapdragon 835 processor, 4GB of RAM, and 32GB or 64GB of storage, expandable via microSD card. You won’t find a headphone jack — instead, you’ll need a USB-C adapter to 3.5mm to use an analog pair of earbuds. A 3,000mAh battery is said to last for a full day of use with Android Oreo. 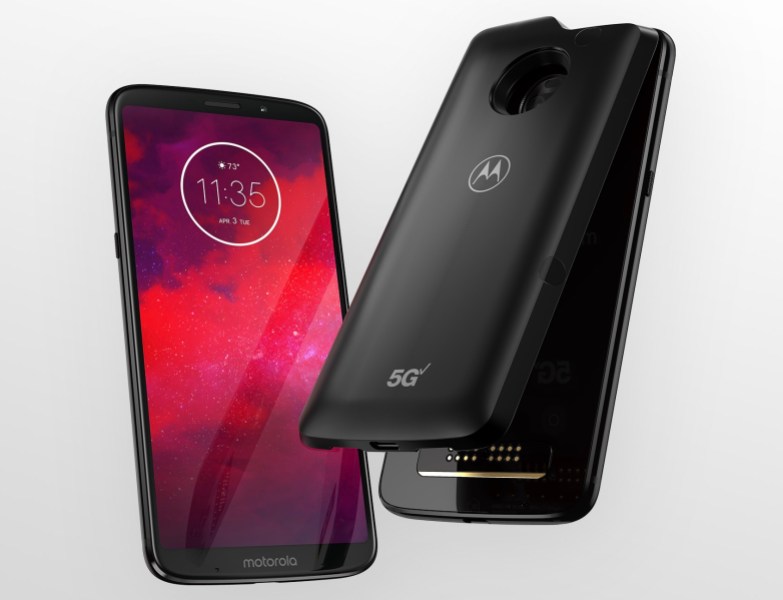 Above: The Motorola Moto Z3.

As its name suggests, the 5G Moto Mod places a 5G modem inside a plastic backpack, using magnets and pogo pins to bond with a Motorola Z-series phone. Noticeably thick with its own 2,000mAh internal battery, the 5G backpack has a hole in its upper center for the phone’s camera. It also has a protruding top antenna bump, likely to reduce interference with the wireless hardware inside the base phone.

Motorola is using a Qualcomm Snapdragon X50 modem inside the 5G Moto Mod. While this modem is capable of supporting so-called “millimeter wave” and “sub-6 GHz” 5G radio frequencies when used with the right antenna modules, the 5G Moto Mod apparently will be restricted solely to millimeter wave use on Verizon’s network. Motorola claims the device will be capable of hitting data speeds up to 5 gigabits per second (Gbps), with single-digit rather than double-digit millisecond latency (responsiveness).

Verizon 5G service will commence in four markets — Houston, Los Angeles, Sacramento, and a yet-to-be-named additional city — in the second half of 2018, with additional markets in 2019. The carrier is expected to focus on home residential broadband at first, then offer mobile service in early 2019.

It’s unclear what real-world improvements can be had by attaching a 5G modem to a 4G phone. While higher-speed data performance is certain to be offered via the 5G Moto Mod’s USB 3.1 interface, it remains to be seen whether that means anything more than faster web page and video load times for the average consumer. The Moto Z3’s comparatively low-resolution screen won’t be an ideal showcase for 4K or otherwise ultra HD videos.

“5G will improve the experience for all types of gaming,” Verizon said, “virtual and augmented reality applications, and for anyone that needs real-time speeds for work and play.” A new Motorola web page dedicated to the accessory suggests that the 5G Moto Mod will give a phone’s Wi-Fi hotspot “a lightning fast boost,” with “bandwidth to share.”

Motorola says the 5G Moto Mod will work with the Moto Z3 “when the new network is available,” and its website promises backward compatibility with “all past generation” Moto Z-series phones “by 2019.” That would normally include the Moto Z, Moto Z Force Droid, Moto Z Play, Moto Z2 Force Edition, Moto Z2 Play, and Moto Z3 Play.

However, the company is apparently not promising that pre-Moto Z3 phones will achieve the full 5-Gbps benefits of 5G speeds, due to their older internals, and a Motorola spokesperson contacted us the day after the event to suggest that it is still “evaluating whether the 5G Moto Mod will be compatible with first generation Moto Z devices.” The Moto 5G Mod will also include a Snapdragon X24 modem that upgrades older phones to the latest 4G hardware, improving their performance as much as is possible.

The Moto 5G Mod is among the earliest actual products to be unveiled with 5G wireless hardware inside, as well as one of the first to be announced. In December 2016, Motorola said that it was already working on the accessory for its original Moto Z phone, though actual 5G networks were only a dream at that point. Since then, it released multiple Moto Mods to add extra battery, camera, video projection, and game controller functionality, but no cellular booster.

Fast forward to today, and two U.S. carriers have promised to launch 5G networks by the end of 2018, with two more planning launches in 2019. South Korean and Chinese 5G networks are expected to be partially operational by next year, with nationwide commercial availability in 2020.

Motorola’s timing and methodology could be perfect for capturing early U.S. adopters. By offering the 5G capabilities as an accessory to existing phones, the company can let customers rely upon a solid 4G phone until 5G becomes available where they live and work. Then users can simply attach or detach the accessory when they’re in need of the higher speed — and willing to deal with what could be considerable additional power drain.

Earlier this week, Motorola’s parent company Lenovo said that Lenovo would debut “the world’s first 5G mobile phone” with a Snapdragon 855 processor, though it was unclear whether that product would debut under the Lenovo or Motorola name. Today’s announcement is more of a 5G accessory than a 5G mobile phone, increasing the likelihood that the company is planning a near-term rollout of a fully integrated 5G device as well.

Updated August 3 at 3:18 p.m. Pacific: Updated with new details on Moto Z and Moto Z2 compatibility, as per a Motorola spokesperson.