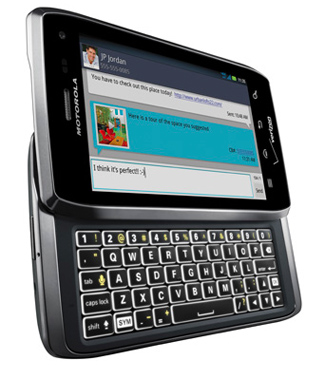 Motorola has introduced the fourth generation of its tried-and-true Droid Android smartphone for Verizon Wireless, this time with 4G LTE data speeds and a 4-inch qHD display.

The Droid 4 closely resembles the Droid RAZR, except the Droid 4 features a full QWERTY keyboard. The Droid RAZR was released to much hype in November, but that hype was later overshadowed by the Galaxy Nexus with Android Ice Cream Sandwich.

With a strong spec list, the Droid 4 hopes to grab the attention of the many Android phone fans who want a physical keyboard. The phone measures .5 inches thick and will feature a dual-core 1.2-GHz processor, 1GB of RAM, an 8-megapixel camera, 16GB of internal storage and Verizon 4G LTE.

While the Droid 4 will not launch with Ice Cream Sandwich, the latest version of the Android operating system, Verizon has said the device will eventually be updated to that OS.

Verizon said the smartphone will launch in the next few weeks. The company did not say how much it would cost, but it most likely will come in at between $199 and $299 on a two-year contract.

A few more images of the Motorola Droid 4 can be viewed below: