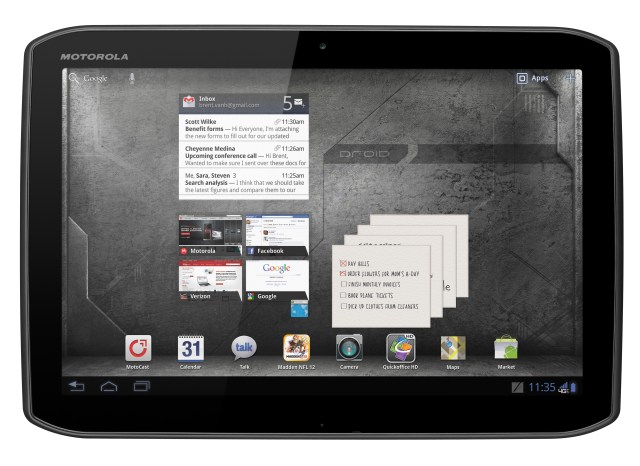 We knew they were coming, but now we know the pricing for Motorola’s new Droid Xyboard tablets on Verizon Wireless. The smaller 8.2-inch slate will sell for $430 and the 10.1-inch Xyboard will go for $530 when they’re released later this month.

The Droid Xyboard (seriously?) tablets are both rebadged versions of Motorola’s Xoom 2, its follow-up to the poorly received Xoom tablet from earlier this year and the smaller Xoom 2 Media Edition. They come perfectly timed for holiday shopping, but with cheaper competitors like the $200 Kindle Fire on the market, Verizon’s going to have a tough time convincing consumers they need a high-end Android tablet.

Unfortunately, neither tablet will ship with Android 4.0, codenamed “Ice Cream Sandwich,” the hotly anticipated new version of Google’s mobile OS. Verizon says that they’re both upgradeable to Android 4.0, but it’s unclear when exactly that upgrade will be available.

Under the hood, both slates are powered by dual-core 1.2 gigahertz processors, with 1 gigabyte of RAM and LTE 4G capabilities. They feature MotoCast, the company’s homegrown software to share files from your home computer, and mobile hotspot functionality, which will let you share your LTE connection with up to eight other devices. Camera-wise, the tablets sport a rear 5-megapixel shooter and a front-facing 1.3 megapixel camera for video conferencing.

The Xyboard Droid tablets are slated to land sometime this month, and they will require a two-year wireless service contract with Verizon. There’s still no word if Verizon will offer a Wi-Fi only version of the tablets, which are already available in Europe under the Xoom 2 name.