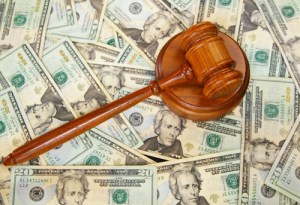 A German court sided with Motorola in a patent lawsuit against Apple today, granting an injunction against the iPad and iPhone maker. Apple said it plans to appeal the decision.

Motorola’s lawsuit, which was filed in April 2011, accuses Apple of using patented cellular data transmission technology in its iPhones and 3G iPads without paying. Motorola can pursue the injunction by posting a $133 million bond, prohibiting Apple from selling the offending devices in Germany unless Apple removes the technology.

“We’re going to appeal the court’s ruling right away. Holiday shoppers in Germany should have no problem fiddling the iPad or iPhone they want.” Apple said in a statement.

Apple has defended its use of the technology on FRAND (fair, reasonable, and non-discriminatory) terms. When a technology is classified as FRAND, the owner of the patent is required to license it to other companies for a fee, since the technology is considered essential to an industry. And Motorola does in fact license this same patent (a “method for performing a countdown function during a mobile-originated transfer for a packet radio system”) to other companies.

Apple is offering to pay the fees going forward, but it’s too little too late. The company has used the technology in its 3G products, without coughing up payment, for years. Apple fought against paying past due amounts, causing the German courts to side with Morotola.

This is just the latest court decision in a back-and-forth patent battle between the two companies that goes back years, and will most likely continue well into the future.