Motorola held events in three cities today to launch the newest incarnations of two of its phones — the flagship Moto X smartphone and its mid-range Moto G.

These include the Moto X Style, the Moto X Play, and a new Moto G. The phones feature updated display and camera capabilities, but one of the biggest updates is about price and carrier flexibility. Users will now be able to buy an unlocked Moto X or G at a relatively affordable price. 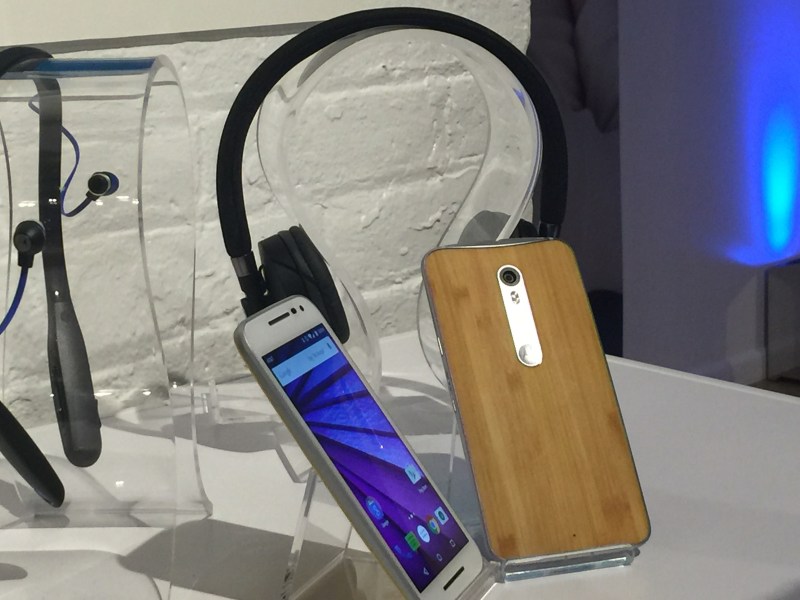 The new Moto X Style features a large 5.7 inch Quad HD display, but the sides of the phone are thinner than its predecessor. This will make the video much brighter and crisper, in line with other new 2015 flagships from the likes of Samsung and LG. 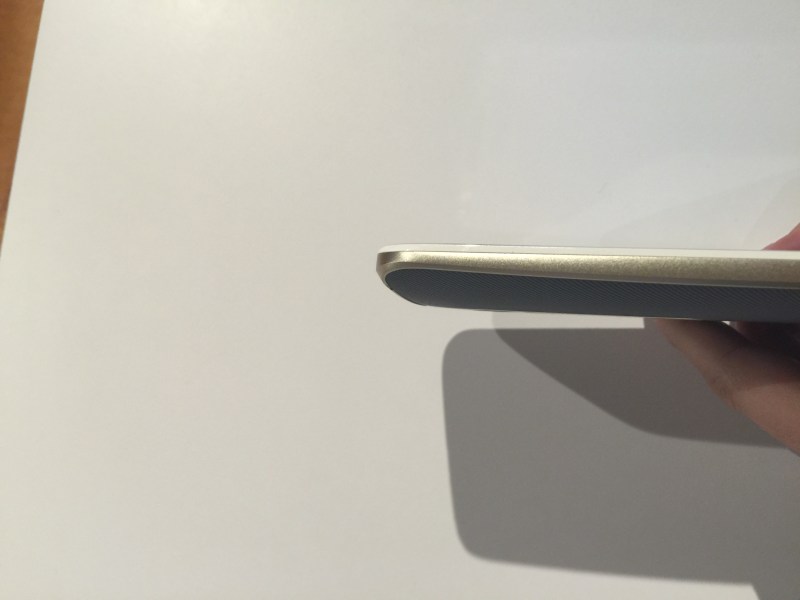 The Moto Style features a curved removable back that comes in an array of styles, colors, and materials, like silicon, wood, metal, and leather, as the last generation Moto X was.

The new Motorola phone focuses on battery life and the ability to charge quickly. The Moto X has 4 GB of RAM, and is powered by a large 3,000 mAh battery.

What’s more, you can now purchase the Moto Style unlocked and without a contract. The phones have universal LTE bandwidth, which means they can work on any carrier.

The new Moto X runs a Qualcomm Snapdragon 808 processor — not the most powerful processor in the Qualcomm family (the Snapdragon 810 is). It runs Android 5.1 (Lollipop); an upgrade to Android M will likely come later in the year.

One lovely thing about Motorola smartphones is that they don’t pile a lot of overlay software on top of stock Android, and the new Moto X is no exception to that rule. Though Motorola makes a couple of minor interface tweaks to the operating system, users get the full Android experience. 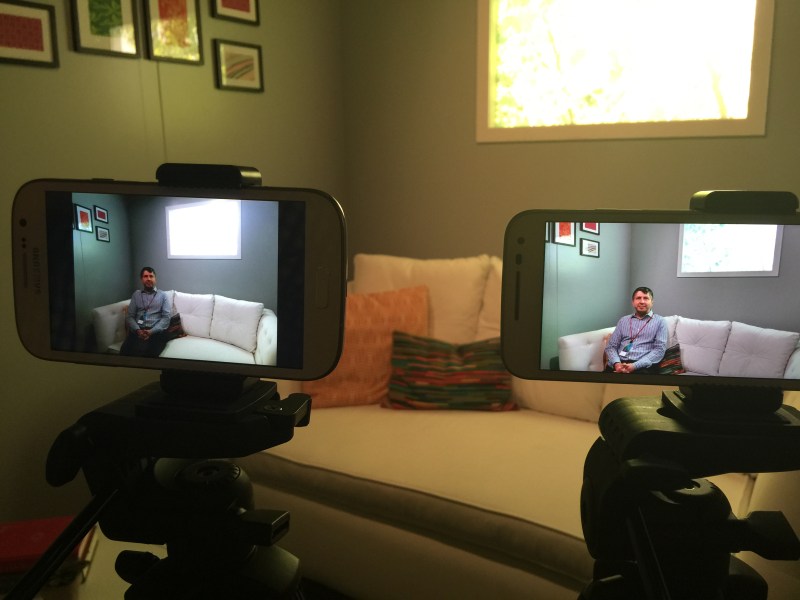 Above: The Galaxy S Duos on the left versus the Moto G on the right.

Motorola has said that it intends to take photography very seriously in its next generation of phones, and they have. The first thing you might notice about the new Moto X is that it has a photo sensor and a flash on the front of the phone. The front-facing flash is meant to improve the light quality of selfie images. The back camera is now a large 21-megapixel affair capable of capturing 4K video.

The company said that Style X will cost $399 and will come to Europe, Latin America, and North America in September. 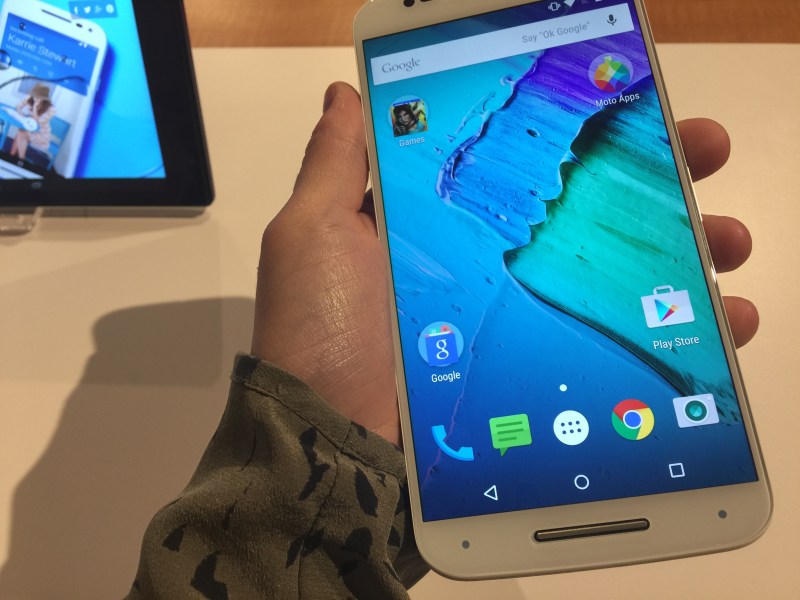 The company also introduced the Moto X Play, a phone with a 5.5 inch full HD display that will cost $299. Think of this as the younger sibling to the Moto X Style. It features a 3,630 mAH battery that gives users 48 hours of battery life per charge.

The Moto X Play won’t be immediately available. Starting in August, the phone will be available in parts of Europe, Latin America, and Canada, but not the U.S. 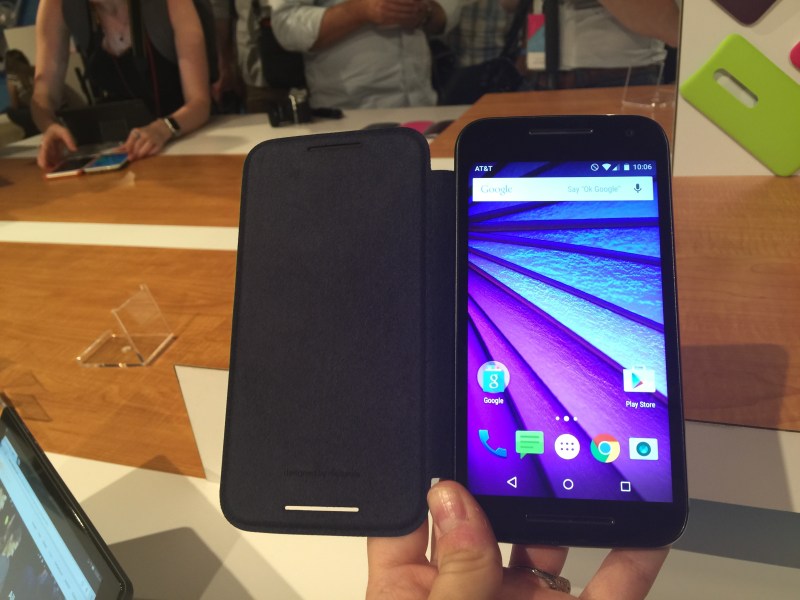 The biggest upgrade in the new Moto G phone is a larger 5-inch display that’s now full HD. The phones come in black or white and have a textured back for grip. You can also now personalize the Moto G in Moto Maker and pair it with Motorola’s array of colorful shells.

The Moto G features 1PX7 protection, meaning it can stay up to an hour in a meter of water.

Motorola said the Moto G will start at $179 and goes on sale today around the world.