The blockbuster phone of the early 2000s is back, but not in the way you remember it. During a flashy press event in Los Angeles this evening, Motorola unveiled what it’s simply calling the new Razr, an Android (specifically Android 9.0) smartphone with a clamshell-style form factor that folds a full 180 degrees. It’s something of a love letter to the Razr V3, with a zero-gap hinge that remains flush when closed and an external display — the Quick View Display — that mimics the original.

The new Razr, which costs $1,500 ($62.49 per month for 24 months on a payment plan), will be available exclusively on Verizon and select European carriers with preorders starting December 26 and in-store availability beginning January at Verizon and select Walmart locations. In Canada, it’ll hit store shelves in early 2020.

Motorola says a cross-functional team collaborated with Lenovo to develop over 20 different prototypes before settling on the new Razr’s design. The patented mechanical hinge — the fourth of several versions tested — moves articulated elements to the edges, such that the display curves into a bell shape at a crease-resistant angle.

Above: An animation of the Razr’s hinge mechanism.

The new Razr’s stainless steel body measures 72 millimeters wide, 172 millimeters long, and 6.9 millimeters thick when unfolded, and about half the length (94 millimeters) and double the thickness (14 millimeters) when folded entirely in half. (Motorola says it had to re-engineer antennas to fit in a space twice as small as the average smartphone.) It’s mercifully lighter than rivals like Samsung’s Galaxy Fold (which weighs 269 grams) at 205 grams, and thanks to nanocoating material, it’s both splash- and dust-resistant.

The new Razr’s 6.2-inch OLED Flex Display, which has an ultra-wide 21:9 aspect ratio, is made from a flexible polymer with a 2,142-by-876 pixel resolution. It’s coated with a protective material designed to withstand scratches, and it’s affixed to metal plates that pull it tight when it’s unfurled. As alluded to earlier, the Razr features more than one display. The second is the outward-facing Quick Display, a 2.7-inch, 600-by-800 pixels (4:3 aspect ratio) screen that spotlights missed messages, incoming calls, and notifications. There’s more to it than that — the Quick Panel supports a stripped-down set of interactions including replying to texts, placing calls, controlling music playback, tap-to-pay with Android Pay, toggling connectivity settings, and more.

Under the hood, the new Razr packs a 64-bit octa-core Qualcomm Snapdragon 710 system-on-chip paired with 6GB of RAM and 128GB of storage. It’s somewhat of an unusual choice, given that the Snapdragon 710 is over a year old and that next-gen Snapdragon 700 series chips launched in April. Nevertheless, Motorola asserts that the six power-efficient Kryo 360 Silver cores (clocked at 1.7GHz) and two high-performance Gold cores (clocked at 2.2GHz) hold their own in day-to-day tasks. The new Razr’s battery is a tad on the small side at 2,510mAh, at least compared with Galaxy Fold’s 4,380mAh battery. But it supports fast charging at 15W courtesy Motorola’s TurboPower tech, not wirelessly but through the USB 3.0 Type-C connector on the phone’s bottom half.

On the connectivity side of the equation, the new Razr doesn’t support 5G, but compatibility with Bluetooth 5.0 and wireless 802.11 a/b/g/n/ac dual band 2.4GHz and 5GHz networks is present and accounted for. That’s in addition to location services including GPS, AGPS, LTEPP, SUPL, and GLONASS.

As befits a Motorola smartphone, the new Razr ships with features carried over from previous products.

Moto Actions saves time by condensing multiple steps into single taps and swipes. Behavioral triggers silence notifications and calls when the new Razr’s lying face down on a table or stops playing music when the screen dims, or launches the flashlight or the camera app in selfie mode when the corresponding gesture is detected.

Peek Display encompasses the range of actions that can be performed on the Quick View Display, including notification preview and dismissal. Emails can be responded to with canned replies or with voice dictation, and songs playing in the background can be paused or skipped with a swipe up on the media player icon. 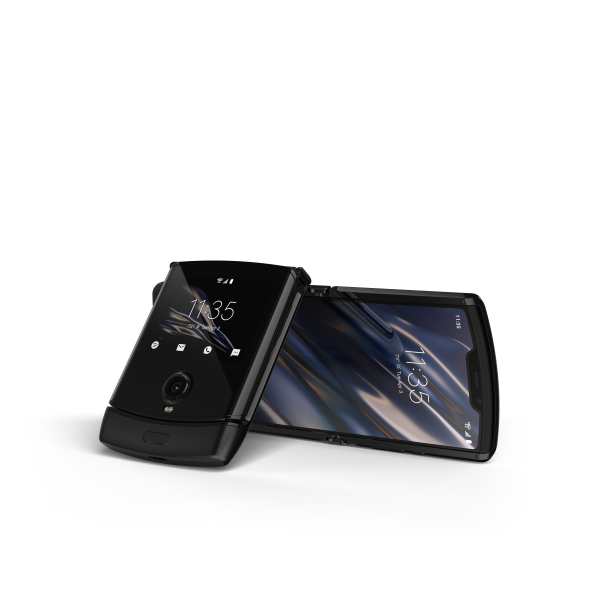 In this camera mode, the volume keys double as shutter buttons and the Auto Smile feature snaps a photo the minute it detects a grin. Meanwhile, Gesture Selfie triggers a two-second countdown timer before taking a shot when it recognizes an open palm.