A study published this month in the Journal of Adolescent Health showed that sexual violence on campus has reached epidemic levels.

An app called MrGabriel — developed native to the Apple Watch and also available on iPhone — hopes to bring a feeling of safety to its users. The app combines the Watch’s wearable sensor technology with machine learning and real-time data to keep its owner out of harm’s way.

“Personal safety is absolutely essential to being able to fulfill one’s potential as a human being,” said Virginie Gretz, the CEO of VProject, the company behind MrGabriel.

“As long as some people feel more at risk than others, and accept self-limitation,” she said, “there is no equality.”

Gretz, a veteran of video game developer Ubisoft and of Google, decided to build the app, based on her personal experience of dangerous situations. She says her wish is to make it simple and fast to get help, to make everyone feel safer, especially women.

The app is simple. An alert can be triggered manually or automatically, depending on the mode set by the user, who has chosen three friends or family members, called “Angels,” to be notified in an emergency. The alert is an SMS sent to all three Angels, warning them that the user needs help, with the user’s exact location at the time of the alert, and the user’s phone number to call immediately.

Two modes, called “Run” and “Walk With Me,” provide the watch wearer with a companion that will monitor any sudden moves or changes of pace that could be interpreted as signs of danger. Before any message is sent out, the app sends the user a message asking if she or he is OK. If the user does not dismiss the message, that triggers the alert.

MrGabriel’s goal is to launch alerts upstream to prevent incidents from happening altogether. SMS was selected for the alert message because it is the strongest, most reliable signal. 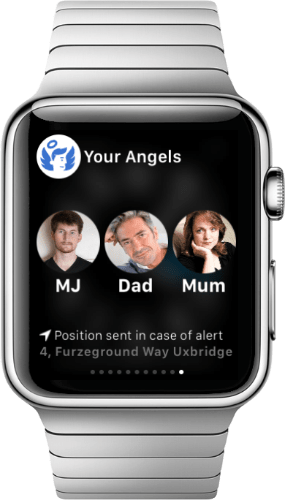 It was a very deliberate choice to alert the user’s most trusted friends rather than immediately calling 911. That method helps ensure that accidental dismissals of the confirmation screen or other errors don’t trigger an emergency call. Angels literally act as a filter to make sure the next call placed is the right call: contact the owner of the watch to find out the real situation or call 911 if the user doesn’t respond. The geolocation helps fast-track the process — the device updates the location every 10 seconds or every yard until the user cancels the alert from his or her device.

As soon as Saif Jivani, national affairs director at the University of California of Berkeley, read about MrGabriel on PR Newswire, he knew this could change the equation on college campuses. A student himself, Jivani recounted the story of a female friend who was held at knifepoint on a BART bus while a man masturbated. She was able to send a group text on her watch and her friends called police. Having an app like MrGabriel could have been even safer, Jivani said.

Jivani was so moved after learning about MrGabriel that he wrote a memo to the Office of External Affairs Vice President, in whose office he works, urging the office to publicly endorse the app and promote it at sexual assault workshops. While women are most affected by rape, Jivani pointed out that students of any gender or orientation may feel unsafe on campus after nightfall. An app on the watch is a lot more discreet than a pulling out a phone and trying to make a call or send a text, he said.

Jivani said he hoped the discussion of apps such as MrGabriel also could help change the conversation around sexual assault on college campuses.

“The conversation is changing but not in the way that it needs to. Students need to discuss what constitutes sexual assault and understand how to best protect themselves,” Jivani said. “Too many of my friends have been assaulted for me to not care about it. I don’t want anyone else to be left alone.”

There are other apps that address personal safety.

The best-known is probably Circle of 6. The two apps are very similar, but Circle of 6 also encourages lighter uses such as “saving” yourself from a bad date with a fake call to interrupt the tete-à-tete. While MrGabriel could technically be used similarly, Gretz prefers users use the app only in emergency situations so as not to “cry wolf.”

Guardian app also is similar, except it requires an Internet connection to send alerts as opposed to a regular cell connection with just enough power for an SMS.

Perhaps the closest competitor is a wearable: a piece of jewelry by Stiletto. The Florida-based startup makes necklace pendants that can be pressed — like clicking a mouse — to trigger various alarms depending on how many clicks, from 1 to 3.

The primary differentiator for MrGabriel from the competition is that most other services rely on manual activation. MrGabriel uses sensors and artificial intelligence to determine changes in your behavior and physiology that trigger an alert. The Apple SDK announced at WWDC also means Watch apps will be able to access more sensors than have been previously available.

These triggers for alerts are in development: heartbeat (a sudden spike in your heart rate), speed (sudden acceleration), and height fall (a minimum of a fall equivalent to your height so it’s not triggered every time you drop your phone or watch). The app learns how you move, including your usual gait, so it can use that information to better determine if there is something unusual happening to you.

Of course, if there is no cellular network available (which still occurs even in some urban areas), the app will not work. In addition, if the app is in manual mode, a person might not have enough time to trigger an alert in case of emergency. VProject recommends using “run” or “walk” as the default mode when out, but other modes are being developed that could account for other sorts of activities and situations.

There is also a risk that an assailant could see the “are you OK?” check-in message and become more violent. However, if the assailant seizes and destroys the watch or phone, that is recognized as an anomaly, and the app pinpoints the last location and time the Watch was available and sends out an alert to the user’s angels.

VProject expects to announce its first institutional funding round shortly.

Amy Vernon is cofounder of Predictable.ly, a predictive analytics platform for news publishers. She spent 20 years in newspaper journalism, has consulted for many companies on their social media strategies, and is a freelance writer and editor.