FreedomPop, a mobile virtual network operator (MVNO) that offers SIM cards with completely free basic mobile service plans, has announced the next step in its plan to gain mindshare among the mobile masses: zero-rated access to WhatsApp. This means the messaging app will be completely free to use, regardless of a user’s remaining data allowance, though unfortunately the offering will initially be limited to those in Spain, where the company is launching the service in the next few months.

Founded out of Los Angeles in 2011, FreedomPop has built its mobile offering around giving away free talk time, text messages, and data in the hope of upselling to those who require more than the basic bundled allowance. The company has largely operated in the U.S. since its inception, though it went international for the first time with its U.K. launch back in September. Spain represents FreedomPop’s third market — its first since closing a $50 million funding round back in January — and its launch gives some clue as to how the company plans to take on the world.

With more than a billion users globally, Facebook-owned WhatsApp needs little introduction. Other mobile networks around the world have offered zero-rated access to WhatsApp, along with their other services, but the practice has been controversial in some markets. Back in February, India banned Facebook’s Free Basics when it introduced a new law in support of “net neutrality.” This law targets “discriminatory tariffs” that give preferential treatment to some services over others. It has been a controversial issue in Europe too, with critics calling for the practice to be banned. But new EU regulations announced last year didn’t ban it — instead, they allowed national regulators to decide for themselves.

WhatsApp has sought partnerships with mobile operators globally for a while, long before it was acquired by Facebook for $19 billion. But its efforts in Europe have been less pronounced. You may remember that WhatsApp partnered with German mobile network E-Plus back in 2014 to launch its very own SIM card — the SIM was geared toward WhatsApp power-users who want unlimited access to the service regardless of what their remaining allowance is for the month. 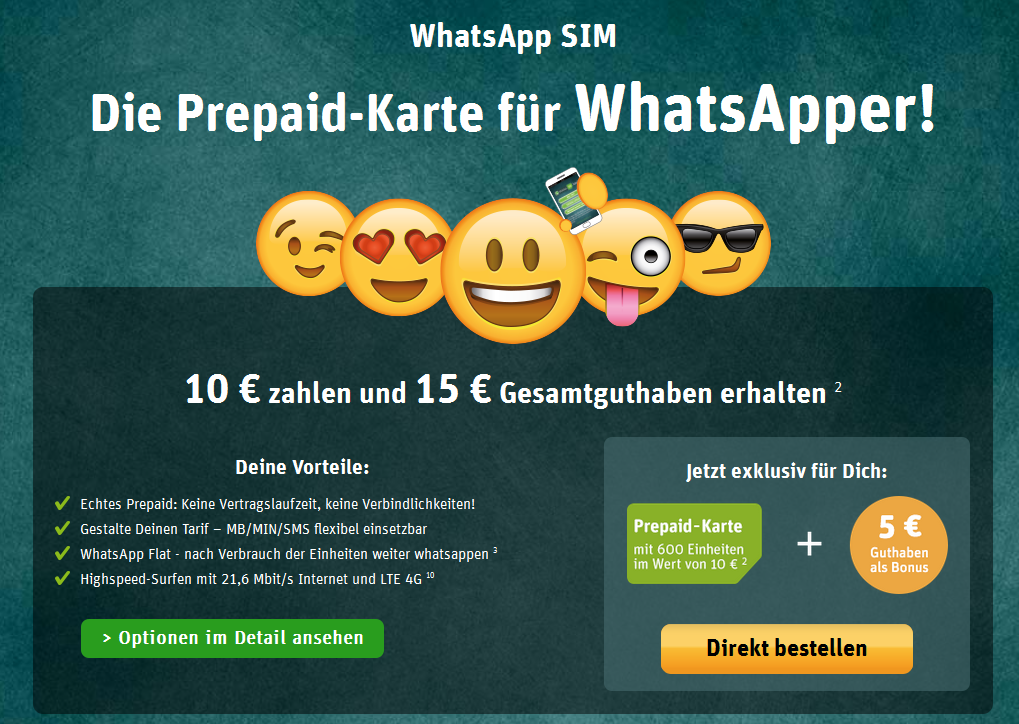 But what FreedomPop is doing is completely off its own volition — it hasn’t partnered with Facebook or WhatsApp in any way.

“Part of the reason why this (Spain launch) is important is because it is not in formal partnership with WhatsApp,” explained Stephen Stokols, FreedomPop CEO, to VentureBeat. “FreedomPop is the first carrier to embrace WhatsApp organically and create a model that works without having Facebook push it.”

Plus, the real hook into FreedomPop’s service is the fact that it also offers you a free package of 200 minutes, 200 texts, and 200MB of data. This “hook” is what FreedomPop hopes will get your attention and lure you into becoming a paying customer. But with WhatsApp permanently free when it launches in Spain this summer, does this mean that FreedomPop will be following a similar path in other markets?

“We are looking at similar models in other countries,” Stokols said. “Our aim is to disrupt local markets in a way that will also help us gain traction with their residents. WhatsApp is the most popular texting app in Spain, so launching our service via their app will help us gain traction.”

WhatsApp is the most popular messaging app in many markets, so we can perhaps take this launch a sign of what may be to come, though this is the first time FreedomPop has zero-rated access to an app in any of its markets.

“With more than 70 percent of Spain’s mobile consumers using WhatsApp, it has completely cannibalized traditional mobile services in Spain and shaped a unique opportunity for companies looking to embrace the new OTT world we live in,” said Steven Sesar, FreedomPop COO and cofounder. “We’re creating a new mobile business model by leveraging WhatsApp’s success to ensure anyone can communicate 100 percent free, simply by covering the data bill for WhatsApp.”

Another major selling point for FreedomPop is that it offers its users free roaming in 31 countries, including the U.S., U.K., Germany, France, Italy, and others, though it’s worth adding here that this offer is only open to those living in the U.S, U.K., and soon Spain. However, FreedomPop will be ramping up its global expansion by the end of the year, “either by partnering with existing mobile carriers or disrupting entirely new markets via unique models,” the company said. Make of that what you will, but zero-rated access to popular apps such as WhatsApp could prove a smart way to grow.

FreedomPop is accepting beta registrations for its service in Spain from today.