I began working on stories related to the 2014 International CES weeks ago, starting with prebriefings from dozens of companies. Then I arrived on Sunday Jan. 5 and stayed through Friday morning Jan. 10. Here’s the story of my journey through CES in pictures. 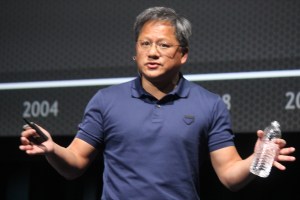 Above: Jen-Hsun Huang of Nvidia showed off the Tegra K1 #CES2014

Sunday Jan. 5: Arrived at 9:40 am and got stuck in an hour-long wait at the Fox rental car pickup. But I heard the East Coast storm was wrecking a lot of trips for many attendees. Checked in at the hotel. Went to the Mandalay Bay convention center.

I attended the Consumer Technology Trends and State of the Global Consumer Electronics sessions. And then headed into the CES Unveiled press reception, attended by about 4,000 press. It was crowded, but I snapped a lot of pictures (including the one of the ice sculpture above, and interviewed some folks). There were hundreds of exhibitors and party goers, including the representatives from Kolibree, the maker of the zany connected toothbrush.

Then I moved to the Nvidia press conference at the elegant Cosmopolitan Hotel to hear the unveiling of the Nvidia Tegra K1 chip. 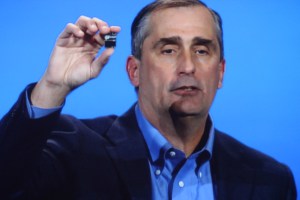 Monday Jan. 6: Attended LG’s press conference at the ungodly hour of 8 am. Then went rapid-fire to Sharp, Panasonic, and Qualcomm. Grabbed a bite to eat and saw Intel’s Mooly Eden talk about “perceptual cameras.” I skipped Samsung and Sony, as my colleagues attended those events. Instead, I made my way to the Ghost Ball at the Palms Hotel & Casino, where Gabe Newell gave a 10-minute talk on Valve’s launch of Steam Machines and 14 hardware partners that are making the living room game computers.

I sped off to the Venetian Hotel, where I watched Intel CEO Brian Krzanich give his first keynote speech as the new boss. He predicted the rise of wearables, the internet of things, and cool new computing technologies.

I then went to the Pepcom Digital Experience party where I saw hundreds of companies with products on display.

Tuesday Jan. 7: Got my Starbucks and dashed off to the convention center, where I barely found parking in the giant main lot. I moderated a session on the Five Trends Driving the Future of Gaming. We had a good discussion with representatives from Microsoft Xbox, Sony Gaikai, Oculus VR, and Rovio.

Then I went to Intel’s fashion wearables design roundtable and interviewed Intel’s Steve Holmes about wearable designs. I visited Panasonic, interviewed Intel’s Mooly Eden, and then dropped in on Qualcomm, whose booth was right next to Intel’s. I scurried to the central plaza where AMD had a briefing in its tent. Then I interviewed Nvidia execs and went to my car for a nap. I attended a dinner with Sony’s CES contingency. Kaz Hirai, chief executive of Sony, gave a two-minute toast and then left the dinner. But we had a fine meal and smores at the end. By that time, it was too late for me to make it to the Showstoppers party. 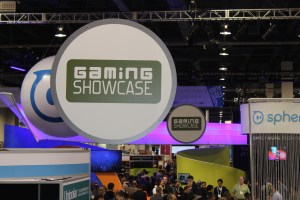 Wednesday Jan. 8: Started slightly later with the first interview of the day with Jami Laes, executive vice president at Rovio, the maker of Angry Birds. Then I saw Colin Giles of Huawei to talk about the growth of China in consumer electronics. I met with Imagination Technologies, the CEO of Synapitcs, and the CEO of Broadcom.

Finally, I had a chance to walk the show floor. Met with Amazon’s app store representatives. I looked at 200 startups at the Eureka Park section of the show. Then took my nap. I then went to the Planet Hollywood restaurant, Koi, and attended the Voce party.

Thursday Jan. 9: Made it bright and early to the Oculus VR room to see their fine new prototype for virtual reality goggles. Then I hiked through the South Hall and went to meet Tobii, the maker of eye-tracking software for games, and Anki, the maker of the race track and digital cars.

I visited the Sony booth to get a look at PlayStation Now and Sony’s virtual reality goggles. I met with a video game source and then toured the central hall of the giant Las Vegas Convention Center.

Friday Jan. 10: I got up at 4 am and checked out. Headed to the airport and went back home. Then I collapsed. I missed one appointment which I hadn’t written down (Sorry Toshiba). And I had published 50 stories during the week.