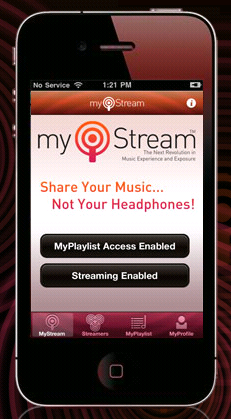 Have you ever sat next to a friend on the train and wanted to listen to the music he or she was listening to, only to be forced to uncomfortably share headphones? MyStream, which is launching its free iPhone app today, wants to change this by allowing you to share your music wirelessly with friends.

MyStream allows you to see what other people in the same wireless or Bluetooth network are listening to. It lets you listen in on the songs other MyStream users are listening to, or 30 second clips from other songs on playlists they’ve created.

Says Richard Zelson, founder of MyStream, “Imagine immediately being able to listen to a song stored on a friend’s iPhone at the same time as them without needing to share their headphones or be tethered to them using a splitter.”

Richard Zelson came up with the idea when he was traveling in Europe and wanted to listen to his friends’ songs on the train. After being frustrated that the only way to do this was to share headphones, he set out to find a solution.

All audio is streamed via an iPhone’s WiFi or Bluetooth wireless technology, so the application works whether on a bus or plane and doesn’t require a connection to the Internet. When the application is being used it is public to anyone in the wireless network, and more than one person can listen in on the music. According to Richard, when the application is running there is an additional 20% battery drain on the phone.

With regards to potential copyright law violations, the company believes it has a low level of liability. The application does not enable any music sharing that is not already possible through portable speakers or an audio splitter.

MyStream’s business model is based around revenue from 5% commissions it receives from songs sold through the application, advertising from the bar on the app, and in the future, potentially from money it will charge for the app.