Gabe Leydon, the CEO of MZ (formerly Machine Zone), built his real-time infrastructure to handle millions of players in connected mobile games like Game of War: Fire Age and Mobile Strike. But that infrastructure can do so much more, as Leydon described in a talk today at MobileBeat 2016.

Leydon showed that real-time bots that run on MZ’s RTplatform infrastructure can operate the entire public transportation system for the country of New Zealand. Not only does it track the taxis, buses, trains, traffic, parking spaces, and everything related to the network but it also lets consumers access that data in real time so they can know precisely when the next bus will arrive at their stop.

Leydon revealed this real-time platform to VentureBeat founder Matt Marshall earlier this spring, and now the system is in testing in Auckland. Today, Leydon showed a progress report on where the system is today.

As Marshall noted earlier, most bots solve relatively small problems, and they’ve been quite fashionable in Silicon Valley since Facebook launched a bot platform in April to help businesses interact with its 900 million users. But Leydon is building bots to run countries.

“You won’t just be running transportation from that,” he said. “You’ll be running everything. Pizza bots are great tools as personal assistants, interacting with just my data. The bots of the future will interact with all of the data and make a decision based on what everything that is going on.” 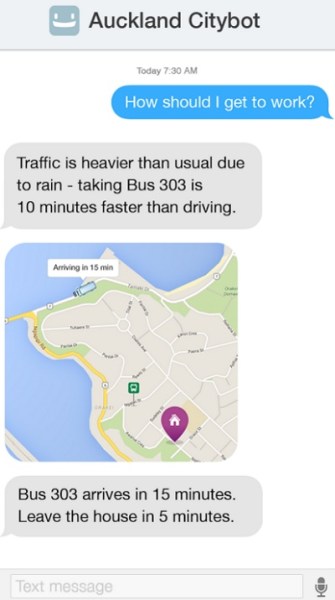 Above: MZ’s RTplatform can tell New Zealanders what traffic is like in real time.

He added, “You are going to have networked computers that can talk to billions of computers at once, and they will be able to make decisions instantaneously. That’s happening today.”

MZ’s Game of War title has been in the top-grossing ranks on the mobile app stores for about three years — an amazing run that enabled MZ to grow to hundreds of employees and build out its real-time technology. The tech keeps millions of gamers engaged by translating in-game messages across 32 languages in real time.

The system can handle 300 million or so messages in a second in a single channel, Leydon said. And New Zealand is currently using only 1 percent of that messaging capacity.

“The command center is live and being used now,” Leydon said. “The mobile app is coming in a couple of months.”

In the command center, that data is “totally blowing the minds” of the operators, Leydon said, as they’ve never had that data instantaneously before.

Once the citizens get the app, they can participate in the data collection. Leydon said that the country will be able to learn how much time each person has to wait for the bots. The learning will build over time, and the citizens will get their time back.

“We can run real-time search queries into this stream,” Leydon said. “We can write a complex search query and get instant response. You can search through it and run an intelligence platform on top of it.”

The cloud technology allows billions of interconnections to take place instantly. The extension of that technology to transportation was almost a happy accident. On a trip to New Zealand, Leydon noticed that the country had an open applications programming interface (API) for its public transportation system. He asked the New Zealand authorities if he could build a command center to make its transport system much more efficient. MZ started by building a pilot for the country’s largest city, Auckland. It tracks the city’s entire fleet of 3,000 buses and the usage patterns of the up to 2 million people — residents and tourists — who ride those buses over the year.

In real time, Leydon showed 600 buses were online in the city, with about 4,000 riders. And roughly 15 percent of them were not moving on the correct routes. He pointed at one bus and said that the driver was on a freeway and was a couple of miles off the correct route. The New Zealand authority ought to give the driver a call to find out why. That saves the authority money, since the fees that are automatically charged to citizens are based on location information. The government agency gets hundreds of emails each day from citizens asking for refunds because the buses were off route.

In setting up the system for the New Zealand authorities, Leydon unveiled a webpage that showed authorities the real-time location of all of the city’s buses on a map, and how many people were in the buses. This step alone offered new, unprecedented transparency. For instance, officials could now see any buses that were running the wrong routes (see map above, where the red dots signify buses that are off-route). The problem, mostly created by innocent driver error, was producing havoc in the system and creating irate customers. The live dashboard gives authorities more power to take action. 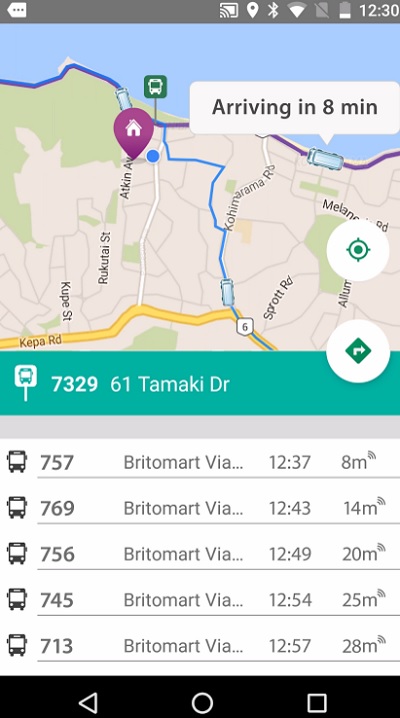 Above: MZ can tell you when your next bus is coming.

And the system could grow bigger than just public infrastructure. MZ is building an open API, and so operators — including private companies — could decide to add their own assets to the system, too. So, for example, MZ might offer users a list of buses or taxis in their proximity, but also cars from private companies like Uber or Lyft. Add in retail stores, restaurants, airline information — it’s hard to know what MZ’s system can’t accommodate.

The RTplatform could be disruptive in other areas, such as search. Google’s search architecture is built around crawling and indexing static web pages, for the most part. But people are expecting more real-time data, said MZ product manager Wei Luo. She said that’s why messaging services like Twitter, Whatsapp, Messenger, and WeChat have gotten hundreds of millions — and in some cases, billions — of users. Google would have to rebuild its architecture entirely to be able to search for things happening now, or to get notifications about things as they happen. Notably, Luo used to work at Google before coming to MZ last year.

Leydon has recently bolstered the team working on the RTplatform, in an effort to start selling licenses for the technology. He just hired Nasi Jazayeri, former executive vice president of Salesforce Community Cloud, to run the platform.

So just how big a market is MZ looking at? Leydon reminded me that the smart city market alone is expected to total $1.4 trillion by 2020, tripling in size over just 17 years, according to Grand View Research.

Instead of someone like Facebook providing a network, the city or country itself will be the network, Leydon said.

“To me, the network is broken,” Leydon said. “There are three billion people online but you would never know it. That’s what we can do. Expose you to the totality of the network.”

Matt Marshall contributed to this report.