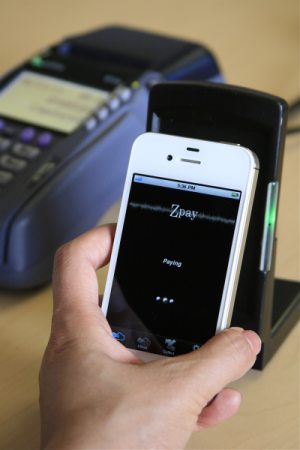 Zoosh, a new technology developed by Sunnyvale startup Naratte, aims to deliver all the benefits of NFC (near-field communication) with any device that has a speaker and microphone. Instead of relying on NFC chips, Zoosh uses ultrasound to perform secure mobile transactions.

The technology — which can be added to any app or device with a simple software update — drastically reduces the barriers to entry for NFC-related tasks like mobile payments and secure data transfer.

For all the hype NFC has been receiving over the past few years, it’s still limited by the need for new devices with NFC chips. Zoosh, on the other hand, can easily be deployed to existing devices — making it a simpler and more cost-effective choice for merchants and consumers.

In practice, Zoosh performs just like typical NFC technology: You wave two devices near each other and a transaction occurs almost instantly. But instead of waiting for a response from NFC chips, Zoosh instructs the devices to listen for ultrasonic communications.

In a conversation with Naratte co-founders Brett Paulson (CEO) and Byron Alsberg (Chief Development Officer) last week, the pair said that the company was able to pull off the groundbreaking technology thanks to the unique backgrounds of its 12-person team. That includes employees with seasoned experience in acoustics, digital signal processing (DSP), and wireless from companies like Apple, Google, Texas Instruments, and Qualcomm.

Zoosh can work offline — since its transmissions move directly between devices — and it can even work in extremely loud environments. Naratte says that upgrading an existing point-of-sale terminal to use Zoosh can cost up to $30, while doing the same for traditional NFC technology can cost between $100 and $850. The company tells me that the amount of data Zoosh can transfer is comparable to NFC. 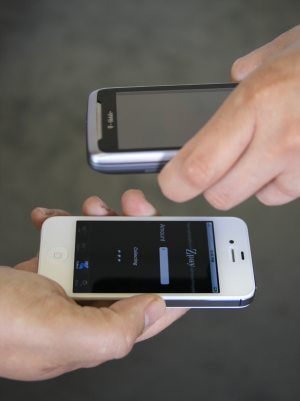 Paulson and Alsberg stressed that security is something they played close attention to for Zoosh. Every Zoosh transaction has a unique and perishable ID, so even if someone managed to record the transmission, it would effectively be useless. The pair also said that transmission distances are controlled, making it very difficult for someone to capture Zoosh transmissions without being right near you.

Naratte was founded in May 2009 and has been operating in heavy stealth mode since October 2010. Sparkbase, one of the company’s earliest partners, has already won a major technology innovation award for its Paycloud mobile wallet app, which relies on Zoosh technology. Naratte also says it’s working on using Zoosh to send virtual checks and cash from person to person. Further down the line, the company says Zoosh could be used for social networking (think of NFC-enabled contact exchanges and check-ins), vending machine payments, and painless Bluetooth device pairing.

It may sound like Zoosh is competing against Google Wallet and other NFC-based initiatives, but it could actually end up being something that Google licenses (or perhaps even purchases) down the line to bring Wallet to phones without NFC chips.

With eight patents filed already, Naratte seems poised to carve out an interesting niche in the mobile payments arena. The company is well aware of the potential for its technology, and it plans to license it out heavily. For now though, it’s hoping to make Zoosh an integral choice for mobile payments.

Naratte has raised $5 million in a first round of funding from an unnamed strategic investor.