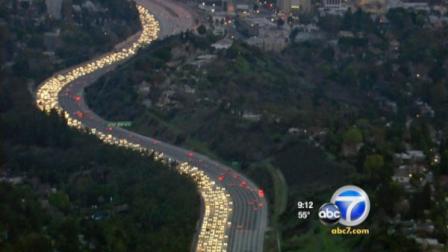 Waze, a mobile traffic and navigation app, is giving Los Angeles commuters a new weapon in the battle against bumper-to-bumper traffic.

Doomsday scenarios have been all the rage this year, but one is actually going to happen: Carmageddon — the complete shutdown of the 405 freeway in Los Angeles, starting at 7pm on July 15. During this horrific event, 10 miles of northbound 405 and four miles of southbound 405 will be closed for construction for 53 hours, affecting an estimated 500,000 drivers.

Haven’t had the life-altering experience of driving in L.A. traffic? I could tell you about how it sucks your soul and crushes your dreams, but instead I will describe it with actual statistics. Rush hour in Los Angeles is actually “rush eight hours.” According to the 2010 Urban Mobility Report, published by the Texas Transportation Institute, L.A. has congestion eight hours a day with a commercial cost of $16 per hour for commuters and $106 per hour for trucks/commercial vehicles.

Basically L.A. traffic on a normal day is hell, but Carmageddon weekend will add a 10th circle to Dante’s Inferno.

That’s why Waze is teaming up with L.A.’s KABC News, Channel 7, to help drivers navigate alternate routes during construction. To cover the congestion of arterial streets, KABC will use existing traffic cameras (like the one shown in the image on the right), live reporters and live updates from Waze’s community.

As a former TV news producer, I have two issues with this approach:

1) Most drivers aren’t watching TV while driving (I hope), so this will only help them before they hit the road. Real-time radio would help drivers, but Waze’s VP of Platform & Partnership says this service won’t reach radio listeners.

2) Many weekend drivers in L.A. are tourists who won’t be aware this service exists. While KABC’s coverage of the partnership has been extensive, it’s doubtful tourists have seen it before they reach LAX, hop in their rental cars, and head toward the 405. Locals will certainly benefit from Waze, but tourists may not.

On the plus side, Carmageddon is part of a $1B highway improvement campaign that isn’t expected to be finished until 2013. There will be plenty of opportunities for this partnership to assist local drivers during future road closures.

The partnership with KABC-TV marks Waze’s first large scale-media distribution in the United States. Waze’s citizen traffic technology is also being used by Channel 2, Israel’s largest news network. I’ve added a YouTube clip at the bottom of this story that explains that partnership in depth.

Founded in 2009, Waze now claims 4.5 million drivers use its service. The company launched its service in Spain and the United Kingdom last month. In December 2010 the company raised $25m from original investors Blue Run Ventures, Magma and Vertex (Waze received an initial $12 million from those investors in 2009), along with “new strategic investors” including Qualcomm Ventures.

Waze is available on the Apple AppStore, the Android Market Place, the Nokia Ovi Store, RIM’s App World and Windows Market or download from m.Waze.com.

VentureBeat is keeping a close eye on Waze since the company showed up in Apple’s iOS legal disclaimer, which hints Apple might be working on its own mapping solution, despite a renewed partnership with Google Maps.

Here’s the video I mentioned above. About half-way you’ll see the bit about Waze and Israel’s Channel 2.