From Flipboard to Circa, there’s no shortage of news aggregation apps out there, designed to deliver alerts to your phone the second news breaks.

While many news aggregators already feature video snippets, NBC’s real-time Breaking News service has just introduced a new live video feature to its iPhone app, with the Android incarnation set to follow suit within a couple of months.

Available via the web, Twitter, smart TVs, and mobile apps, Breaking News has emerged as a popular service for those who don’t have time to watch mainstream news programs but who want to be in the loop on big news stories as they emerge.

The new live feature taps video from NBC News itself and Stringwire, a user-generated video platform acquired by NBC back in 2013. Breaking News will broadcast between 3 and 6 live events a day, covering things like press conferences, protests, and other major newsworthy events.

The good news is that rather than sending you a random bunch of videos on subjects that may not be of interest to you, the videos are tied in with the specific topic notifications you’ve already set up. So if you only want alerts on “Baseball” and “Barack Obama,” you’ll only be alerted to relevant videos. 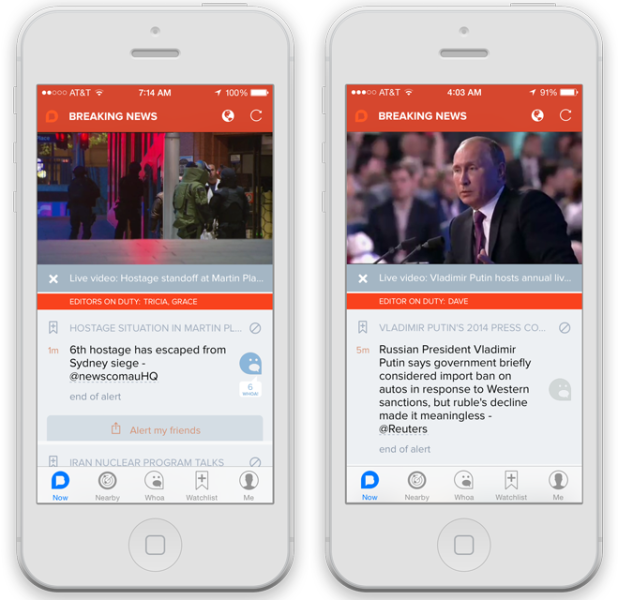 The app also plays in split-screen mode, meaning you can continue browsing other news stories as a video plays. To play full-screen, simply tilt your device into landscape mode.

While there are video-specific news aggregation services out there already, such as Watchup, this is one of the first times live video has been included in such a service.

In June, last year, Breaking News also introduced new proximity alerts, which let you set notifications based on where you currently are. So if you happen to be a few streets away from a major story, you’ll know instantly. With that in mind, the latest update for iPhone now lets you drop a pin on the built-in map to see breaking news anywhere around the world.

With improving compression techniques and a rise in 3G/4G connectivity, video is playing an increasingly significant role in online communications. Indeed, we recently wrote how 2015 would be a breakout year for video advertising, while Facebook video posts have grown by 75 percent globally in the past year. So it’s perhaps not surprising that live video is emerging into the news aggregation sphere.