Circle is one of the few social, local, mobile apps that is actually growing.

This app, which shows people what is happening in their immediate vicinity, has surpassed 10 million users, with over 1 million users joining every month. It is currently in 1,765 cities across the country. 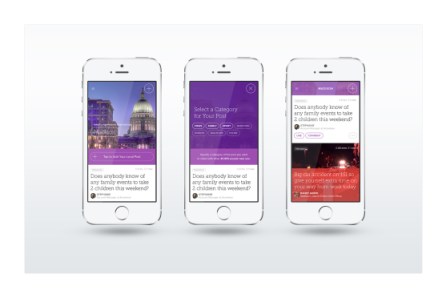 “I got fascinated by the idea of connecting people in the same location,” Reas said in an interview. “Circle is like a local Twitter for Main Street. I am from Wisconsin where you can just ask random strangers for help, but you can’t do that in most cities. Circle brings that small town feel to everywhere.”

Circle is a location-based social network where you can view activity feeds of local activity. Members can post specific questions, ask for help, or use Circle to distribute information.

Reas gave the examples of someone with a flat tire who inquired through Circle if anyone could help. He said if you did that on Facebook or Twitter, it might not be useful because people aren’t necessarily nearby. On Circle, that person quickly had multiple people offering assistance.

“It’s about things that are more relevant to where you are than who you are,” Reas said. “We are focusing on regular users, not just Silicon Valley users. It is just getting to the tipping point where people from places like Wisconsin are starting to use these types of apps and be OK about privacy and sharing location.”

Reas said the app is very popular with moms but has a wide and diverse user base across America. Local business owners use it to share promotions, parents to get play date ideas, and there is even a group of fisherman in Seattle who use Circle to find where the fish hot spots are that day. A barber in Chicago used it to warn people of a shooting. The use cases are flexible and endless.

New features include specific channels for trending, news, family, sport, question, events, nightlife, and other. Circle has also implemented a photo-sharing feature and a more advanced algorithm that will send the most important information to the top of your news feed.

Reas was also excited about a new “dynamic average color” design feature that automatically changes the app to a new color theme every time you open it.

Nextdoor has raised over $100 million for its “private social network for your neighborhood.” Both startups cite their mission as aiming to connect people and strengthen communities. However Circle takes a different approach from Nextdoor, because it isn’t based on the neighborhood you live in, but on where you happen to be at any given moment, and the goal isn’t necessarily to get people to meet in the real world.

Circle is free, but Reas said there are plenty of opportunities to monetize down the road. He said businesses could use the network to target potential customers nearby and that musicians could use Circle to say they are playing a gig that night. A political candidate in New Jersey is currently using Circle to reach constituents.

For now, however, Reas is focusing on growing the number of users and cities and increasing the amount of engagement.

“We want people in every city in the U.S. to be posting daily, commenting daily, and interacting with each other all the time,” he said.