Neighborhood-focused social network Nextdoor has closed its series F round of funding at $170 million, four months after the San Francisco-based company announced it had raised $123 million at a staggering $2.1 billion valuation.

The additional $47 million was added by Bond, the new billion-dollar growth fund spun out of Kleiner Perkins and led by Mary Meeker, who now joins Nextdoor’s board of directors.

“Mary Meeker has been a strong supporter of Nextdoor for many years and is deeply knowledgeable about consumer technology,” said Nextdoor CEO Sarah Friar. “At Nextdoor, we believe that change starts with each of us opening our front doors and building deeper connections with the people nearest to us: our neighbors.”

Founded in 2010, Nextdoor connects people in local areas — not unlike Facebook, but with a firm focus on smaller locales — and can be used for posting messages about lost dogs or sourcing babysitters.

The platform currently serves the U.S., U.K., Germany, Sweden, Denmark, France, Italy, Spain, the Netherlands, and Australia, though with $170 million in the bank the company said it’s well-financed to expand into “many more” markets in the future. 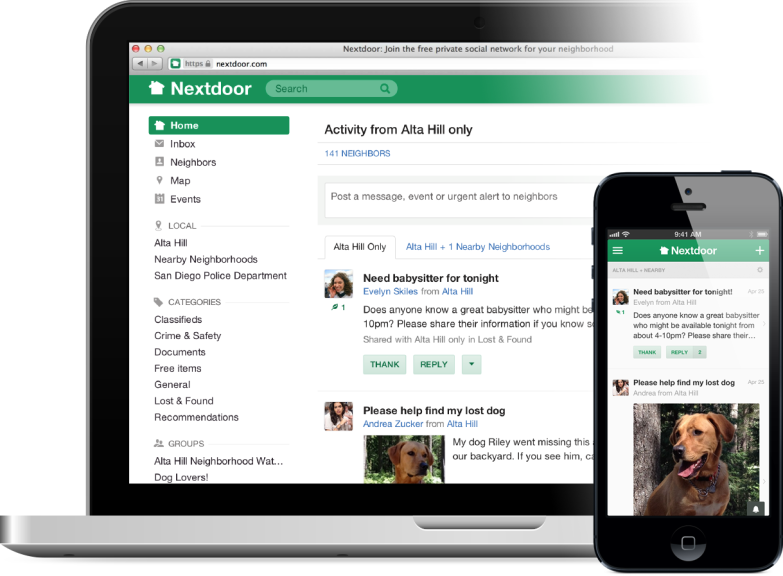 Above: Nextdoor in the browser on the desktop and on the iPhone.

Nextdoor has now raised north of $450 million, and its attraction to investors may have something to do with the fading appeal of massively open global social platforms such as Facebook. In fact, Mark Zuckerberg is currently in the process of trying to bring Facebook back to basics by making the platform more private (yup) and focusing on closer, more meaningful relationships.

Fostering local connections is something Amazon is also investing in, having last year launched the Neighbors app, powered by its Ring security camera. And a few months back Google’s sister company Sidewalk Labs invested in Umbrella, a community marketplace for elderly people.

“Nextdoor has proven itself as the leader in local connectivity,” Meeker added. “Nextdoor is built on trust — verifying each members’ name, address, and neighborhood — which creates the transparency and accountability that is core to building communities.”