Google, through its Nest Labs home automation division, today announced another major step toward the formation of an ecosystem for connected home devices and apps.

Nest, along with Samsung, ARM, and four other partners, today announced a new home automation network protocol called Thread, along with a new industry group (the “Thread Group”) that will guide the adoption of the new protocol, the companies say.

The Thread protocol provides a common network language by which home devices like smart thermostats and smoke alarms can talk with each other, explains Chris Boross, the Nest Labs executive who leads the Thread initiative.

In fact, Nest smart thermometers and smoke alarms have been using the Thread protocol to communicate amongst themselves for some time now, Boross tells VentureBeat. 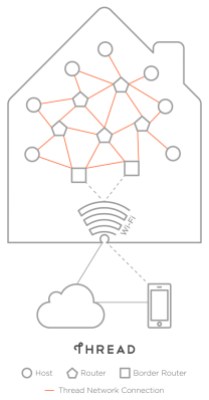 Wi-Fi networks in homes are commonplace, but Nest and its partners believe a protocol that’s purpose-built for home automation is needed.

“We believe there needs to be a second network, a mesh network, that provides direct device-to-device communications,” Boross says.

Boross says Thread uses the common IEEE 802.15.4 wireless protocol, IPv6, and is designed to run on existing silicon radio chips. It requires very little power because many of the devices it’s intended to connect are battery-powered, Boross says.

Nest and its partners are also announcing a new entity called the Thread Group, which they hope will eventually include a host of home device makers. The group will help tech companies adopt the Thread protocol for their products.

Companies that want to join the group will be able to apply for membership later this year, Boross says.

The group will also run a certification program for all products developed using Thread. Certifications will begin in the first half of next year, Boross says.

There’s already no shortage of network protocols and standards for home appliance and device makers to choose from. These include Zigbee Pro, Zigbee IP, Dust Networks, Qualcomm’s AllJoyn, Bluetooth, Z-Wave, Wi-Fi, Home Kit, XMPP, and others.

The Thread protocol will compete most directly with Z-Wave and Zigbee IP, Boross told VentureBeat.

Boross says the idea for Thread came when Nest realized that the existing protocols are limited by lack of interoperability, inability to carry IPv6 communications, high power requirements that drain batteries quickly, and because they use “hub and spoke” models that are dependent on one device (if that device fails, the whole network goes down).

It may be true that Nest started the Thread initiative to build a better home automation protocol, but if the protocol sees wide adoption it would be a clear strategic victory for Nest and Google.

Thread can be seen as Google and Nest’s second major move to build an ecosystem of products and apps. Nest announced the Nest smart thermostat developer API with launch partners Mercedes-Benz, Jawbone, IFTTT, Logitech, LIFX, and Whirlpool in late June.