Despite pledging it would never offer downloads, Netflix is finally letting its millions of users around the world access movies and TV shows offline.

The news will be music to the ears of Netflix’s 80 million-plus subscribers globally, but it will also come as a surprise, given that the company has repeatedly stated in the past that the solution to the problem of ubiquitous access is to improve Wi-Fi availability, rather than offering an offline mode. 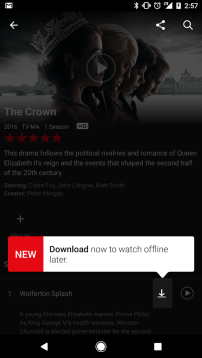 One of the biggest stumbling blocks to offering offline access relates to licensing restrictions — content owners often only want their programming to be accessed in certain locations, and allowing downloads lets people take the videos around the world. But Netflix, it seems, is adopting the same approach Amazon did when it opened up to offline access last year — Only some shows will be available to download. And at the time of writing, that appears to largely be Netflix’s own slate of content, such as Stranger Things, Orange is the New Black, Narcos, and The Crown. There are a bunch of other shows and movies in there, too, though, including City of God and Quentin Tarantino’s Django, along with a reasonable number of kids’ shows and documentaries.

One way to know whether a title is available to download is to see if it has the little download icon next to it. If so, simply tap that and you can access it from a new dedicated Downloads section. But Netflix has also added a helpful Available for Download menu option, meaning if you’re looking to peruse content to watch on a long-haul flight, for example, you can head straight to this section. You can also select your desired download quality, so those with slower bandwidth or less on-board storage can go for lower resolution videos.

The road to downloads

Netflix gave the first hint that it may be willing to allow downloads during its Q1 earnings earlier this year, when Netflix CEO Reed Hastings was asked yet again whether he would consider offline access, and he surprised listeners by giving a less emphatic “no” than he had done in the past. He said:

This was a telling statement. Given that Netflix went truly global this year when it landed in 130 new markets, it faced problems in markets where unlimited Wi-Fi or mobile internet access wasn’t the norm. In other words, Netflix has had to rethink its strategy to ensure those in emerging markets can access content. Some had previously speculated that Netflix might simply offer offline access in some markets — those that needed it most — but that has never really been Netflix’s way; it prefers to tackle markets holistically where it can, and to offer consistent feature sets across the board.

There is another reason Netflix may have finally decided to offer downloads, and that is simply to do with the competition. Last year, it became apparent that downloading really was the future of streaming when a number of online video-streaming services introduced offline access. Furthermore, Netflix’s slate of original and exclusive programming, which is growing across movies, dramas, documentaries, and more, gives the company a significant degree of flexibility about what it does — it can offer downloads on those shows without worrying about licensing restrictions.

Downloads are available to everyone on Android and iOS devices from today.