For the first time, mobile publishers can quickly assess the demographic profile of their users, compare it to those of their competitors’ apps, and easily make accurate data-driven decisions about who to target in acquisition campaigns.

Now we’ll know that pimply teen boys are the core Clash of Clans userbase, for instance, instead of guessing.

Today, App Annie is releasing Audience Intelligence, a demographic profiling tool that can tell mobile developers the age, gender, income, education, and other standard demographic details about their users. But publishers can also use the tool to check the profile of other apps’ users, compare the two pictures, and contrast both with the general app-installing population on either of the major mobile platforms. 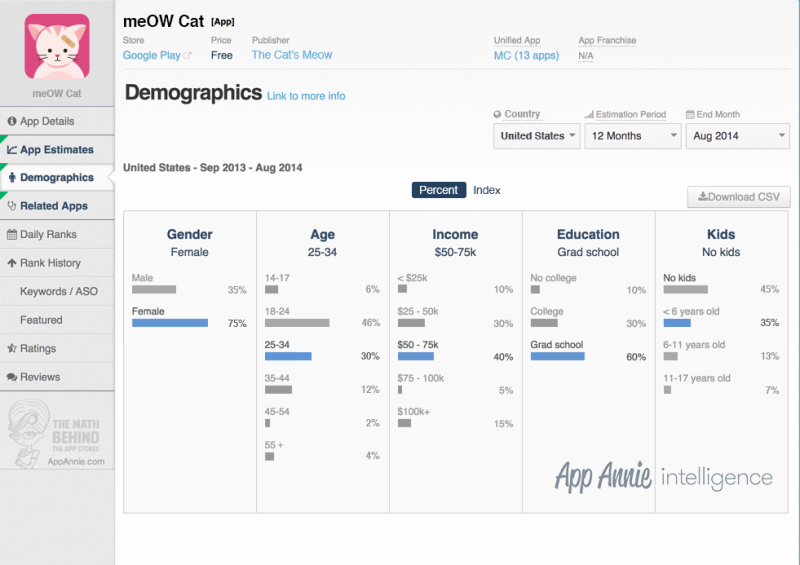 Besides surveying or other laborious forms of collection, app publishers haven’t had a simple way to get this data, which of course is useful for product development, user acquisition, partnerships, and probably even company acquisition efforts.

The information is based on all the myriads of data each of us generate daily, just by living digitally.

“As individuals download apps, leave reviews, and comment on social media, they are generating billions of footprints showing preferences and activity,” App Annie CEO Bertrand Schmitt told me via email. “App Annie has spent the last few years building big data technologies that aggregate, anonymize and analyze these footprints at a massive scale in order to construct a clear demographic profile of a mobile app’s user base.”

The company’s tools are already see users from publishers of over 600,000 apps, App Annie says — including apps from 90 percent of the top 100 companies. The company has tracked the downloads of more than 79 billion apps, not to mention app revenue in excess of $22 billion.

App Annie doesn’t release the number of app users that it reaches, but with numbers like that, it could hardly fail to be a majority of smartphone owners globally — a number that is approaching two billion.

That is a serious amount of demographic data.

Some examples of the data Audience Intelligence can deliver include these, which App Annie shared with me: 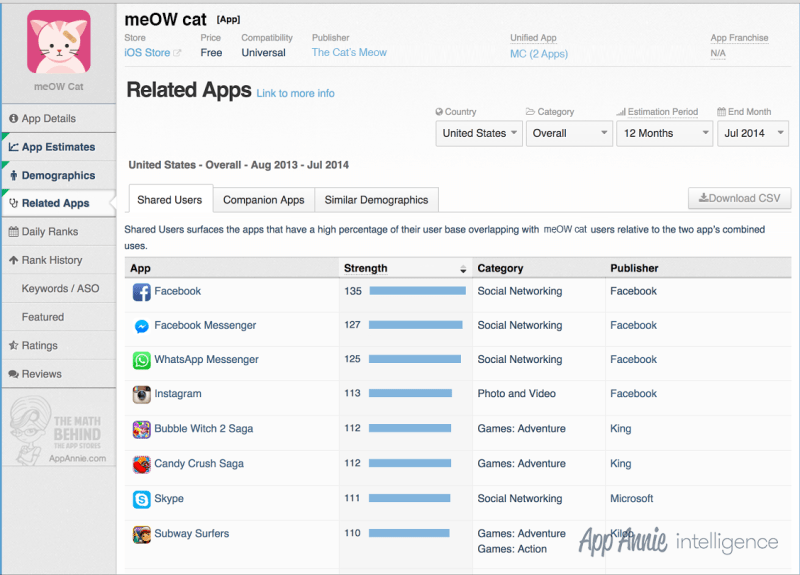 Using the new tools enables app publishers to identify related apps, App Annie says, and also complementary apps — which you might want to partner with in a mutually beneficial user-acquisition campaign. In addition, freemium apps can tailor their pricing and product to a better understanding of core audience.

And here’s another massive use case: advertising.

As an EA exec said yesterday, mobile games may become the largest ad platform for advertising. While that’s hyperbole, few doubt that games have huge potential, along with other mobile apps, to be massive advertising ecosystems. And shockingly, brands want to advertise to known quantities of users with known characteristics … something a mobile publisher can now demonstrate with data it can validate externally.

Not to mention mobile apps’ own advertising.

The product has already been released in private beta, and while App Annie won’t reveal specifics of the results, Schmitt says that publishers who were using it said it gave them data they could not previously access, often even for their own apps.

Now, he said, mobile publishers can understand the users behind the apps — their own … and everyone else’s.