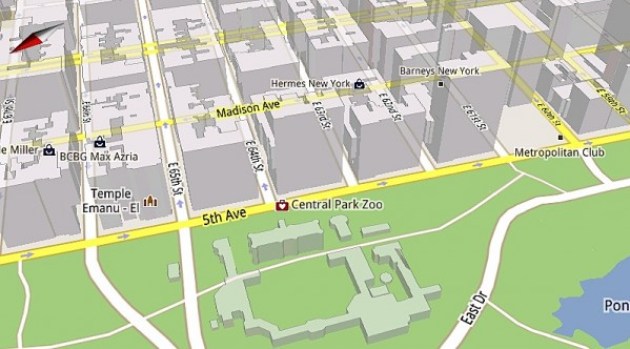 The next major Google Maps update for Android phones looks like it’ll blow the iPhone’s aging Google Maps app out of the water. New features include dramatically faster performance, 3D building rendering, and an offline mode.

Google Maps 5.0 for Android will offer “dynamic map drawing” with vector graphics, which are smaller and load more quickly than the flat 2-dimensional maps the app previously featured. Overall the map performance is much “snappier”, both Engadget and Gizmodo report. There’s also support for 3D building models in over 100 cities. And just like Google Earth, the new Maps app will support tilting, so you’ll be able to get a sense of a building’s height when rendered in 3D. The app will be able to automatically rotate maps using your device’s compass to help you maintain direction.

Thanks to the smaller vector graphics, the app will also be able to cache map data that you use most often to let you view maps offline. The app will download map locations overnight when you’re connected with WiFi. Google says that this feature will make up for over 90 percent of the times the Maps app fails when there’s a bad connection. The app’s Navigation feature will be able to take advantage of the offline maps and re-route you even if you’re without service.

Google’s Andy Rubin unveiled the new Maps app last night at the D: Dive Into Mobile conference in San Francisco, where he also talked about the failure of the Nexus One. Rubin apparently showed off the app on a prototype Android 3.0 (codenamed “Honeycomb”) tablet.

Given the amount of new features in this app, it will be some time before Apple manages to update its Google Maps app to compete on the same level.

The new Maps app will support any Android device running Android 1.6 “Donut” or above. Features like dynamic rendering and automatic map rotation will only work with more powerful Android phones. It looks like the app will be fully functional on the original Motorola Droid, and any Android device more powerful than that. We can expect the app in the next few days, Rubin said.