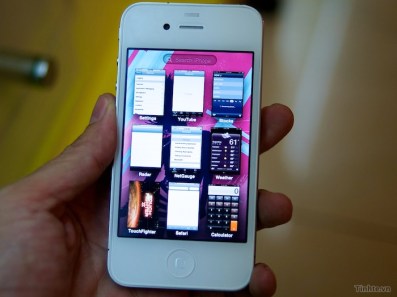 A video has appeared online that demonstrates a new multitasking interface for iOS (that closely resembles the Mac OS’s Exposé feature) running on a 64-gigabyte white iPhone 4, courtesy of the intrepid Vietnamese gadget hounds Tinhte.

The group says the white iPhone is legitimate (not just a knockoff) and that it’s running a “test” version of iOS that has never been seen before.

It’s difficult to determine the veracity of their claims, but I wouldn’t be surprised if  Apple was looking to improve its current multitasking interface — which consists merely of scrolling through icons in your iPhone’s dock — with something that’s a lot more visual.

In the video below, you can see that the new multitasking interface is accessible with a double-tap of the iPhone’s home button, and it displays large card-like icons representing the apps currently running on your phone. To close apps, you simply hold down on the app’s icon, just like you would in the current system. Spotlight search is also accessible from the top of the screen.

The interface does resemble the popular multitasking jailbroken app Multiflow, but there are significant differences from the current release of that app. Tinhte could be trying to pass off another jailbroken app as legitimate, but given how much their credibility with the gadget community would suffer, that doesn’t seem very likely. It’s possible that the software is an early release of iOS 5, which is expected to improve multitasking and notification features for the platform.