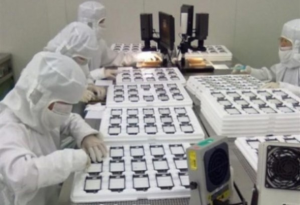 The latest iPhone rumors point to a Summer 2012 launch, a larger form factor, and a possible 4-plus-inch display from LG. The details were leaked by a Foxconn worker in China to 9to5mac — the same source who correctly said an iPhone 5 wasn’t coming out last year.

The source says production on the next generation iPhone will begin soon, but since there are various protypes floating around, he or she cannot give exact specs. In the past, it has taken around five months for Apple to go from production to launch, which could put its next smartphone on schedule for, well, five months from now. The worker shoots down a previous rumor, saying the phones will not be teardrop-shaped (did people really believe that one?).

From the iPhone samples, the worker concludes the new phone will have a 4-inch screen or larger. All the samples are the same thickness, but their lengths and widths vary.

To recap, Apple is definitely making a new iPhone this year but there’s no final version, name, or launch date yet. We think.