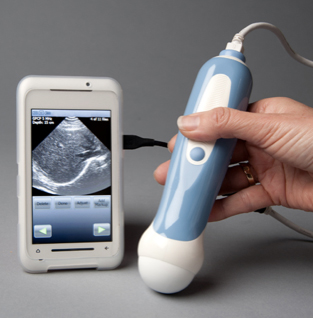 In February 2011, Mobisante got the green light from the U.S. Food and Drug Administration for its mobile, smartphone-powered ultrasound device. It took the medical device startup another eight months to meet the various FDA guidelines, but now its MobiUS SP1 Ultrasound System is finally available for commercial sales starting this month.

The medical device industry is itching to go mobile, but first it has to get the Food and Drug Administration to pick up the pace. For Mobisante, the process has dragged on for so long that its $7,495 ultrasound system ships with a Toshiba TG01 touchscreen phone running Windows Mobile 6.5 — a device that was originally released in 2009. Businessweek magazine reports the FDA is overhauling its policies on mobile device regulation sometime next year, but until then mobile medical device makers must continue to jump through hoops, slowly.

These types of small medical scanning devices with Wi-Fi and cellular connectivity can be taken into the field, are more affordable and easier to operation than full-sized machines, and images can quickly be shared with other medical professionals at far away locations. Captured images are small, a maximum of 480-by-480 pixels — enough for mobile usage but not a replacement for traditional ultrasound machines. The smartphone can store up to 8GB of images and they files be uploaded over a Wi-Fi or cellular connection, or offloaded via USB.

Because the imaging device connects over USB, the company has not been able to work on a compatible version for iPhones, iPads or Android devices, though Mobisante does hope to expand to medical tablet devices such as Panasonic’s ToughBook in the future, according to MobileHealthNews.

The Redmond, Wash. based startup is going up against much larger manufacturers. GE makes the VScan mobile, a $7,900 portable ultrasound device that looks like a large Motorola Razr flip phone. Siemens sells its Acuson P10 ultrasound system for $8,499.