San Francisco-based Nextbit Tuesday took the wraps off its new “cloud first” Android phone, called Robin. The $400 Android (5.1.1) device is tall and squarish (in a good way), and comes in striking light blue and black colors.

The real hook here is that the phone is tightly integrated with an unlimited cloud storage facility that can be used to quickly offload apps, photos, and other content from the phone when space is needed. The idea is that the user will never see a notification saying that he or she has run out of room, Nextbit cofounder Tom Moss said during a briefing last week. 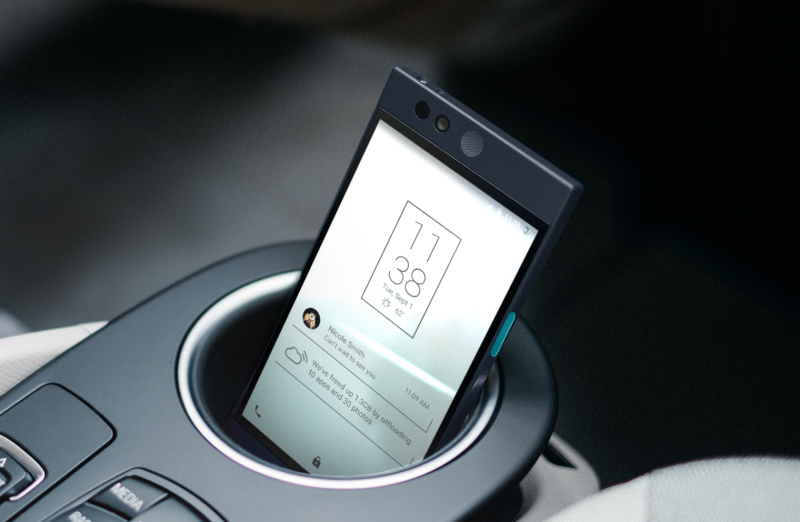 “Nextbit has created the only cloud-first, design-forward smartphone for anyone who wants to be freed from the limits of today’s mobile technology,” the company said in a statement today.

Nextbit said the software brains behind the backup system are smart enough to know what content to move off the phone and into storage. For instance, it might move apps or photos that have not been used or viewed in a long time. An app thats been offloaded will show a grayed-out icon on the phone. Content can quickly be called back to the phone from the cloud when needed.

Robin backs up apps and photos when it’s connected to power and Wi-Fi. These are the default settings to conserve power and data, but they can be adjusted to be less restrictive, Nextbit said.

Another reason for caring about Robin is that Nextbit is founded by a couple of guys — CEO Tom Moss and CTO Mike Chan — who worked at Google on the Android team. Product lead Scott Croyle worked at HTC. They’re pedigreed. Nextbit’s vision was good enough to attract $18 million in funding from Google Ventures and Accel Partners.

Nextbit launched in 2012 and started out by creating a syncing software called Baton. The software automatically backed up and synced apps and data to the cloud, and made files or application states immediately available on other registered devices. So users could continue doing on one device what they’d started on another. That technology was obviously brought to bear in the new device.

In order to manage inventory requirements, Nextbit is making Robin available only via Kickstarter to start with. The phone is available now. The campaign will run for 30 days with a goal of $500,000, although the real point of the campaign is to create a manageable distribution channel. The first 1,000 Kickstarter backers can buy a Robin for $299, while all others will get a price of $349. When Robin is available in general retail in Q1 2016, it will cost $399.