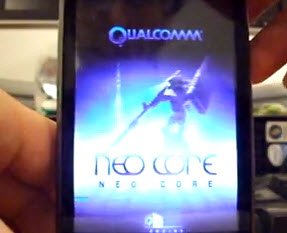 Perhaps Google will still be able to surprise people with its news about the Android-based, Google-designed Nexus One cell phone that will be announced on Tuesday. But a considerable amount of information has already flooded the web, including videos of how the Nexus One operates.

One of the things you’ll immediately notice is this phone is fast. You click on something to make the screen change and it happens instantly. Whether it’s playing games or taking photos, the phone is very responsive. The phone uses a new Qualcomm chip, and so it may spark an arms race in performance gains in cell phones. That’s sorely needed because smart phones have been particularly slow at loading, and touchscreens, even on the iPhone, aren’t up to the highest standards yet.

The first video is a short one from a French blogger that shows off the game-playing abilities of the phone. The video shows a game playing at a fast speed and getting a Benchmark 3D Neocore score of 26.7 frames per second. That means the 3-D graphics capability of the phone is pretty good compared to other smartphones.

The second video is nearly 10 minutes and shows many more features. The touchscreen of the Nexus One is clearly more responsive than the original HTC G1 from T-Mobile, which debuted a year ago. As with the iPhone, you can effortlessly swipe sideways on the screen to make the user interface shift. You can tap on the buttons at the bottom of the phone, or tap on the lower corners of the screen itself to make things happen. The screen color is vibrant and the backgrounds, such as one where you are tapping into water, are cool.

Earlier leaks revealed that the unlocked version of the phone will sell for $530 and the T-Mobile version will sell for $180 with a two-year calling plan that costs $79.99 a month.