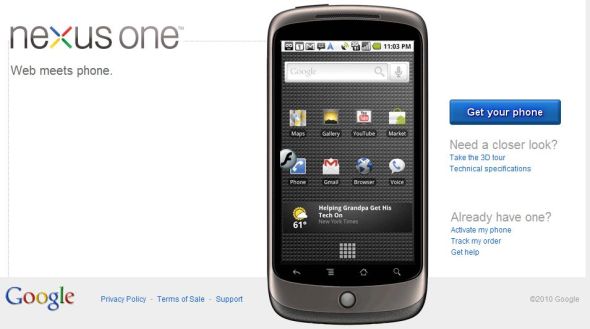 When Google introduced the Nexus One, industry watchers and armchair pundits alike questioned the company’s decision to sell its flagship Android phone only on Google’s web site, rather than in stores. Despite the tremendous buzz surrounding the Nexus One’s launch, a report from mobile analytics startup Flurry suggests the skeptics were right.

The report estimates sales numbers for the Droid and Nexus One in the 74 days following their respective releases — the amount of time Apple claims it took to sell 1 million first generation iPhones. While the Droid bested the iPhone with 1.05 million units sold over that period, Nexus One sales trailed far behind at 135,000 units. Though many in the tech community hailed the Nexus One as an iPhone killer, Google’s sales and carrier strategies limited the phone’s ability to compete in the increasingly tough smartphone marketplace.

While the Droid initially sold quicker than the iPhone, their launches took place in distinctly different environments. The iPhone was the first product to showcase the smartphone’s capabilities as a personal device, with a hefty $600 price tag. When the Droid launched two and a half years later, with a carrier subsidized price of $179, the smartphone market was far more mature and desperate for a worthy competitor to the iPhone (and their exclusive carrier AT&T). The Droid was able to take advantage of Verizon’s significantly larger user base, with the carrier spending $100 million on marketing that highlighted Verizon’s supposedly superior network and special Droid features — multi-tasking for instance — that the iPhone lacked. Launched during the holiday shopping season, the Droid was widely available in Verizon stores and at retailers like Best Buy.

The marketing muscle, large carrier presence, and holiday shopping season that contributed to the Droid’s success were absent from the Nexus One launch. Even though the tech community was captivated by the Nexus One’s promise, Google’s decision to sell the phones exclusively through its web site limited the device’s availability to consumers. We tried out the Droid in Best Buy before purchasing, an option unavailable with the Nexus One. Googlers received the phone as a holiday present from the company, but that was about it for viral marketing efforts.

Nexus One sales were also hampered by Google’s choice of T-Mobile as a carrier. With the phone launched after the holiday shopping period on Jan. 5, T-Mobile put little effort into marketing the phone, possibly because consumers couldn’t make in-store purchases. T-Mobile’s smaller user base, supposedly inferior network, and limited marketing effort behind the Nexus One contributed greatly to the lackluster response, as did consumer fatigue following a holiday shopping season during which many potential Nexus One buyers purchased competing products like the Droid.

Flurry is a San Francisco based startup that claims to be the largest mobile-app analytics and monetization platform. The company’s reports are a bit suspect right now, after Flurry issued a correction yesterday night to a report published 12 hours prior that incorrectly stated that there were more apps available for Apple’s iPhone than for Facebook. (There are more than 500,000 active Facebook apps today, compared to just over 150,000 iPhone apps.) Flurry claims to be embedded in apps downloaded to 80 percent of all iPhone OS and Android devices, providing them the device-specific data used in their research. The company, which recently merged with Pinch Media, has raised over $10 million in venture capital from Draper Fisher Jurvetson, Union Square Ventures, First Round Capital, and other investors.